No short-cuts here, just a lot of dumbbells.

Having started off with a hurley in her hand at the age of six, Ashling Thompson has lived and breathed camogie for over 20 years but is showing no signs of slowing down, or easing off.

The three-time All-Ireland winner and two-time All Star is one of the most recognisable faces her sport and she has won the respect of fans and peers with a string of impressive, whole-hearted performances over the past decade at the top.

Thompson took some time out from her on-field pursuits to share some work-out exercises that she feels have added immensely to her game.

"I'm going to be focusing on my upper-body work-out," she begins, "as I feel it's important to have a strong upper body when you play in a midfield position."

To start off her work-out, Thompson opts for five minutes on the rowing machine. And then the real fun begins.

"This focuses on my shoulders, chest and triceps."

The focus here is on shoulders, of course, and traps [trapezius muscle]. 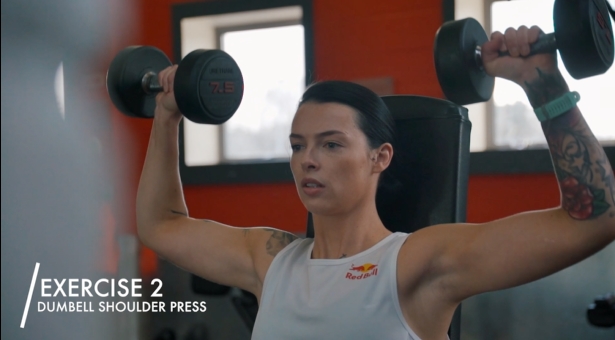 "It's a pull exercises, focusing on my back."

"This is a multi-purpose exercises, focusing on my back, shoulders and arms."

Those exercises should certainly see you right.


popular
James Haskell on text exchange with Peter O'Mahony after Ireland's victory over Scotland
SportsJOE 2000s Football Quiz | Round 8
"The academy boys have turned into small monsters over the past few weeks" - Peter O'Mahony
"I have more work done than any player in Ireland" - The Trevor Giles tribute show
The SportsJOE 12 o'clock quiz | Day 102
Can you name the first clubs these players went to after leaving Liverpool?
Can you name the first clubs these players went to after leaving Celtic?
You may also like
2 months ago
The man they couldn't make training hard enough for
3 months ago
Ranking the most audacious and ridiculous skills pulled off by Irish sports stars
3 months ago
The best sporting challenges to use time off to our advantage
4 months ago
Cork GAA will have fight on its hands to hang onto top prospect
4 months ago
"You grow as a person off the back of injuries...I always had the answer that drove me"
4 months ago
Cork finish with a flurry to stride away from improving Tipp
Next Page