Andy Moran's tiki-taka pass doesn't get the finish it deserved

At the risk of getting completely carried away after Round 2 of the national league, Mayo look good. Really good.

And so it goes, a little earlier than usual, the only question on everyone's lips in February: Can Mayo win the All-Ireland?

James Horan's back and so is the verve out west.

They're transitioning from defence at break-neck speed, they're working like dogs around the middle third and, with every half opportunity, the ball is being kicked long and it's being kicked direct.

Jason Doherty and Andy Moran are the usual recipients and, by the time they grab possession, they have options. Men further ahead and runners bursting from deep, the best runners in Ireland. It's a different level when you talk about off the ball runners and you talk about Mayo's off the ball runners because, here, once the thing is kicked in, coming late with the momentum of unstoppable freight trains are Lee Keegan, Paddy Durcan, Diarmuid O'Connor, Keith Higgins and Aidan O'Shea. 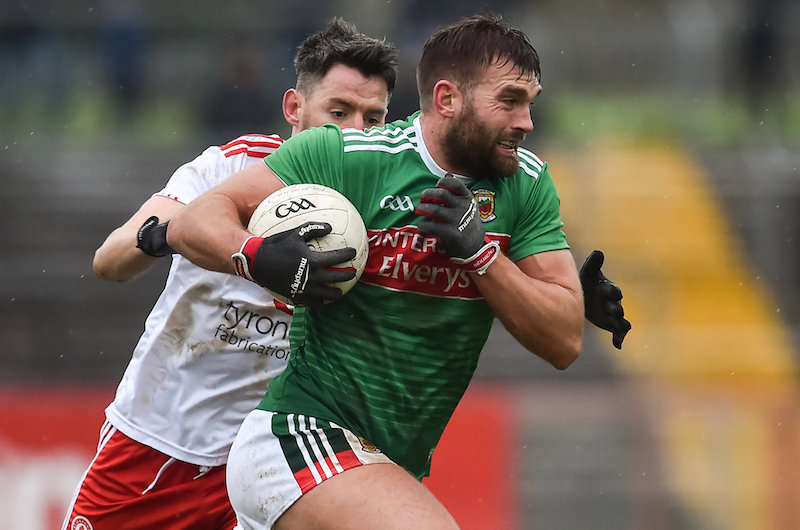 They dominated Tyrone in Healy Park on Sunday. They outran them, outmuscled them and outplayed them severely. It was a bit of a manhandling, if truth be told. One team arrived in Omagh right up to the pitch of where you'd want to be to play Tyrone in their back garden. The other side looked off, again.

Where Mayo were sharp, Tyrone were sluggish. Where the home team were indecisive, the visitors were ruthless. And all over the pitch Horan's men won their battles and created mismatches.

Stephen Coen named at corner back was both a signal of intent and tactically astute, knowing Tyrone wouldn't name three full forwards. Deploying Keith Higgins to pick up the other full forward who'd inevitably drop back was another underplayed decision by the management.

END_OF_DOCUMENT_TOKEN_TO_BE_REPLACED

It was Darren McCurry who Higgins waltzed by as he drove in for a rip-roaring dropped-shoulder goal and it was Higgins who was having a laugh in the Mayo half forward line for most of the game, linking with Moran and co, hurting Tyrone's conservatism.

And if there was any doubt about the longevity of the 2017 Footballer of the Year, Moran looked like a teenager out there with the same zip, the same hunger and the same class as his best days.

His disguised pass to Brian Reape in the first half showed the level of joy and invention cursing through Mayo's football. 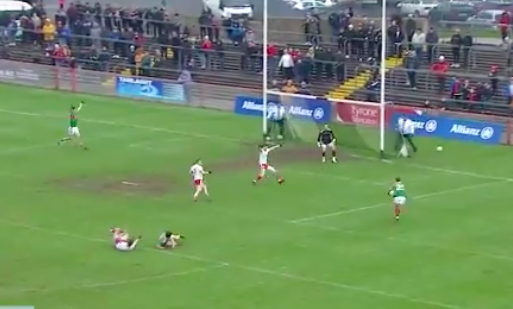 Stephen Coen - the other listed corner back - got the ball first on the Tyrone 20 and palmed it on to Moran. Peter Harte, Rory Brennan and Niall Morgan are all worried about Moran drilling an effort at goal. 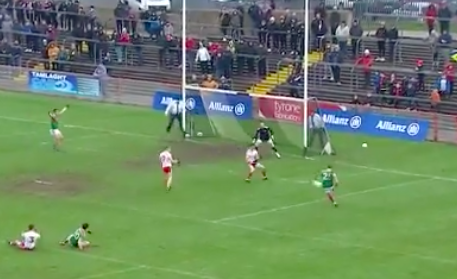 Moran drops the head and puts his foot through it, drawing Morgan more to his near post and freezing Brennan and Harte.

They've been caught out though. 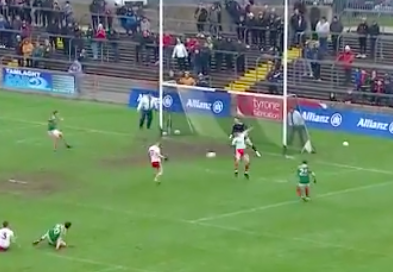 He's spotted Reape at the far side and fed a delightful pass through. 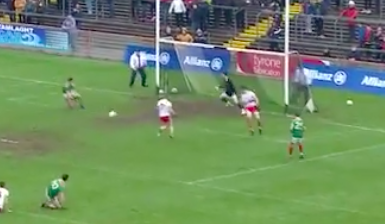 Harte and Brennan can only watch but Morgan got across with super reflexes and agility to get out and close down Reape who might've had better luck if he went on his left.

Mayo have beaten Tyrone by 2-13 to 0-10 in Omagh. Watch the full-time highlights here on GAANOW! pic.twitter.com/3743uuN7VX


popular
Justin Gaethje tells Conor McGregor to wait his turn
The SportsJOE 12 o'clock quiz | Day 73
QUIZ: Correctly identify these World Cup 2014 players from their stickers
QUIZ: Can you name the Football Italia cult heroes? | Part 2
The SportsJOE 12 o'clock quiz | Day 72
SportsJOE 2000s Football Quiz | Round 3
QUIZ: The toughest football legends quiz you'll take today
You may also like
2 months ago
Andy Moran: Using the time off to become a better player
2 months ago
The GAA Hour | Football | Mayo 'standing off', Congress analysis and the Tunnel row
3 months ago
Mayo issue update on crunch Allianz Leagues clash with Kerry
4 months ago
James Durcan stuns Ballybofey with last kick of the game
4 months ago
"Growing up, I would always have been naturally fit"
5 months ago
Mayo confirm cult hero Ciaran McDonald has joined their coaching staff
Next Page