"I was slow, I was never a David Clifford finisher" - Moran's modesty a genuine thing

Andy Moran is out, for the first time in 17 years, but he'll always have the eye-in.

He cares too much, just to forget about it. Was too invested just to leave it all behind now.

Playing with Mayo was his life and times and even though those days are gone, the Ballaghaderreen man looks forward to supporting his former teammates in the years to come.

And for everyone who cares about Mayo football, these are different times.

Moran is gone, others are pushing on. What the county needs now is for another forward to step up and take on the leadership role Moran has held for years, but the 2017 Footballer of the Year has some advice regarding this. Let it happen. Don't force it.

"I think we should pick the forward and build the team around his strengths. I think it's a mistake that's been made over the years that as I was getting older, people were trying to put forwards in for me. What I'd be suggesting is you play to their strengths - my strength was obviously winning the ball as close to the goal as I could and trying to set up play, play to their strengths," he insists on Thursday's GAA Hour.

"Tony was a straight shooter. It was simple, but it was one of the best bits of coaching I've ever got"

"I had to make runs either side of the posts, I loved that anyway..."

Andy Moran on the advice that transformed him in his 2017 POTY season.https://t.co/NXQDDec8cN 🎧 pic.twitter.com/4N8i4e2vLp

END_OF_DOCUMENT_TOKEN_TO_BE_REPLACED

And with typical Andy Moran modesty, he doesn't take himself too seriously. Runs down his own importance before stressing the positives that lie in store for Mayo.

"My game was really simple. It was just repeat ability of something that could do well. I wasn't going around, I was slow, I was a decent finisher, I was never a David Clifford finisher like that. Them guys, Darren, Cillian and James - let's work around their strengths and focus on something they can do well..."

"I was slow, I was never a David Clifford finisher like that..."

At times, you'd forget this is a former Footballer of the Year talking.

As for the retirement, the 35-year-old is glad not to have body fat scans to worry about. At the same time, club football is what's keeping him going.

"I don't have to think about doing a body fat or a dexa scan test in the next couple of weeks so there's part of it that have been very good!

"I was the one fella who always had to worry about them tests unfortunately! I remember going for my last one in May and I remember thinking this is the last one of these I'll ever have to do, so it was great..."

"There's perks to it. Of course you miss the lads, but the club keeps you going, I'll definitely play another year with the club..."

END_OF_DOCUMENT_TOKEN_TO_BE_REPLACED

So, what's next? Moran has always been keen on the coaching and tactical side of the game.

"I suppose now, it's just about what to do next. There's been phone-calls and things like that. For the first time since 2002, I'm not really sure what's going to happen in January..." 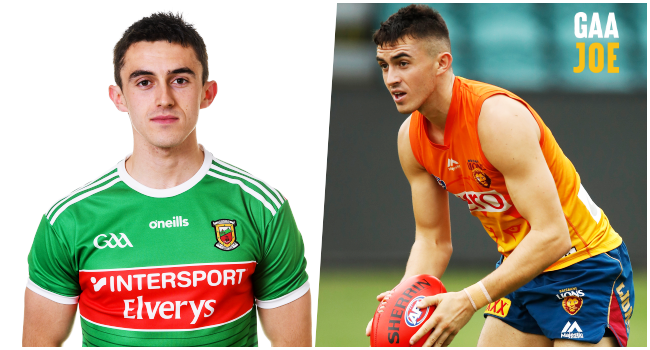 "You've to work, pay bills, you've to deal with these massive changes" - former AFL star driving his club on

Like any club, it comes in cycles for Ballaghaderreen. Go back to 2006 and a golden generation w...

"The one thing that always  attracted me was the coaching side of it, but if you go straight back there, you're not really taking a break at all. I'd always be interested in the tactical side of it, the moves that are being made around the field, those kind of things. It's hard to know, but it's an option on the table alright..."

The man isn't finished yet. You wouldn't be surprised if he's back soon.

"I'll tell you what it did, it made me really enjoy this year. I'd never played in Killarney, I really enjoyed that..."

Andy Moran enjoys every minute of it.

You can watch the Moran interview and much more from Thursday's GAA Hour Show here.


popular
The SportsJOE 12 o'clock quiz | Day 109
QUIZ: Name every player that's scored three or more Premier League hat-tricks
SportsJOE 2000s Football Quiz | Round 9
QUIZ: Name the country these football teams play in
Can you name every English football club that begins with 'B'?
What Leinster's strongest XV looks like when everyone is available
"It's too experimental" - Kenny's team for Slovakia showdown begins to take shape

You may also like
3 months ago
Andy Moran: Using the time off to become a better player
4 months ago
The GAA Hour | Football | Mayo 'standing off', Congress analysis and the Tunnel row
4 months ago
Mayo issue update on crunch Allianz Leagues clash with Kerry
5 months ago
James Durcan stuns Ballybofey with last kick of the game
5 months ago
"Growing up, I would always have been naturally fit"
7 months ago
Mayo confirm cult hero Ciaran McDonald has joined their coaching staff
Next Page