"How are we going to get on par with the men if something so simple can't be solved?"

That's what Cahir are being asked to do this weekend ahead of two championship finals in Tipperary, one in the camogie and one in the football.

The town is coloured in green, the bunting is flying but the players are asking how it has come to this. Again.

🤯🤯🤯On the weekend of the 12/13th of Sept we played two County Semi Finals, Junior A Camogie followed by Senior Football and suffered the consequences. 16 dual players, 10 being starters. This coming weekend the 26th and 27th we are expected to compete in two County Finals

The football final is always played on the final weekend of September but, now, the camogie final is scheduled 26 hours before it. The players approached the county board to ask them to put the game back a week or two weeks - because it's possible with no provincial games to worry about - but nothing changed.

So Aishling Moloney and her team mates refused to just roll over.

"We obviously emphasised player welfare issues with them but, obviously, it wasn't overly a concern to them that we have to play a match on a Saturday and turn around and play a match 26 hours later on a Sunday.

"So we said to them, if they weren't going to accommodate us, we'd have no other choice but to go to the media.

"So here we are, the week of a county final. We should be enjoying it, the buzz around Cahir. There's flags up but no-one can enjoy it because here we are worried if we're going to have to go out and play two matches.

"One on a Saturday and one on a Sunday." 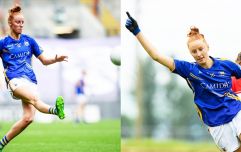 'Wizard' Moloney would make it onto the lads team too

END_OF_DOCUMENT_TOKEN_TO_BE_REPLACED

Just as the 20x20 campaign kicks off which is spreading the idea of #ThinkItAskIt, encouraging women in sport to speak up when they think something isn't right or isn't fair, the female athletes in Tipperary are forced into an unnecessary situation.

"We talk about equality and fairness in women's sport but when things like this happen, you just have to question it.

"How are we going to get on par with the men if something so simple can't be solved like this?

"Some people might say, 'women's sport are always cribbin' and going on about things' but when things like this happen, you're not going to stand back and allow it to happen.

"You have to say something about it and voice your opinion in some way.

"Common sense is such an overused word I think in GAA circles, everyone always says it, common sense must prevail. But I actually think some people need to look up the definition of it at this stage."

"Some people might say "women's sport are always cribbin'" but you're not going to stand back and allow it.

"You wonder what's going on in people's heads.

"We talk about equality in women's sport but you have to question it."@MoloneyAishling on the @CahirClub situation 👏 pic.twitter.com/Bp0N643smz


popular
The SportsJOE 12 o'clock quiz | Day 213
You have five minutes to name these four footballers, but it probably won't be enough time
The Ireland XV that should start against Italy
"There's a nice bit of balance in that full forward line" - Mayo moving well
Faith and Call of Duty - Lynch's Lockdown had a light at the end of the tunnel
Joe Rogan doesn't agree with giving McGregor a rematch against Khabib
The 17 best wonderkids to sign on FIFA 21 career mode
You may also like
4 days ago
"It's good for players to take a step back and look at the whole game" - Áine O'Gorman
4 weeks ago
"You will be exposed if you don't look after your female athletes"
1 month ago
The Long Road | The future for women in sport: Choose what's next
10 months ago
Tampons and pads: Is Ireland "On The Baw"?
11 months ago
Delicious Amber Barrett finish cancelled out by late Greece equaliser
1 year ago
"Number 10... again!" - Majestic Denise O'Sullivan gains two new superfans
Next Page