The Aviva Soccer Sisters virtual skills hub has been launched and who better to front it than Áine O'Gorman?

A distinguished players for the last 15 years for Ireland, a razor sharp and fascinating pundit, O'Gorman knows what it takes to get to the top and she knows how to get that message across too.

Under the tagline #SafeToDream, the Peamount United star is best-placed to tell young women that they shouldn't let anyone tell them they can't. As 20x20 enters it's #ThinkItAskIt phase, O'Gorman is a shining light - playing football at the top, for a second time, and analysing games on TV at the top with distinction.

We spoke to her about she's found the punditry job because, often, recently-retired players - never mind current international players - find the adaptation tough.

Like anything, she's enjoying learning how to become better.

After 100 caps, she retired from Ireland duty. In March, she came back stronger than ever.

An inspirational player who has also proven to be a sharp analyst. If anyone can show the @AvivaIreland Soccer Sisters that it's #SafeToDream, it's @AineOGor9 👏https://t.co/z86aY1nwlE pic.twitter.com/NINSJHWDAJ 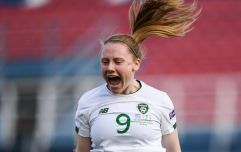 END_OF_DOCUMENT_TOKEN_TO_BE_REPLACED

Republic of Ireland Women's National Team player Áine O'Gorman today launched the Aviva Soccer Sisters Mid-Term Virtual Skills Hub, specially designed for girls to take part in during the upcoming October mid-term. The online skills series will be rolled out daily at 10am through the week of 26th October and can be viewed at aviva.ie/soccersisters.


popular
The SportsJOE 12 o'clock quiz | Day 213
You have five minutes to name these four footballers, but it probably won't be enough time
The Ireland XV that should start against Italy
"There's a nice bit of balance in that full forward line" - Mayo moving well
Faith and Call of Duty - Lynch's Lockdown had a light at the end of the tunnel
Joe Rogan doesn't agree with giving McGregor a rematch against Khabib
The 17 best wonderkids to sign on FIFA 21 career mode
You may also like
3 weeks ago
"How are we going to get on par with the men if something so simple can't be solved?"
4 weeks ago
"You will be exposed if you don't look after your female athletes"
1 month ago
The Long Road | The future for women in sport: Choose what's next
10 months ago
Tampons and pads: Is Ireland "On The Baw"?
1 year ago
"Number 10... again!" - Majestic Denise O'Sullivan gains two new superfans
1 year ago
'Wizard' Moloney would make it onto the lads team too
Next Page