Aidan O'Shea and the throw-in is a show within a show.

We were ready for action at MacHale Park and, at 6pm on August 3, they were already considering whether to knock on the floodlights. Win and rain under a cobalt Castlebar sky. These evenings are made for Aidan O'Shea.

There is jostling from the four men in the middle before referee David Gough gets the nod and throws the ball in. A clean win for Mayo's No.9 but now the hard work starts. It takes three attempts and five Donegal players but Declan Bonner's side finally forced a turnover from Aidan O'Shea.

Donegal stream forward and go a point clear after 60 seconds before Niall O'Donnell doubles the lead. This proves their high point as O'Shea and his brother Seamus begin to take control in midfield.

The remainder of the half sees Donegal harried from pillar to post. Mayo roar back into the contest and Aidan O'Shea is their beating heart. He is dominant in the air and instigates a number of attacks.

Ryan McHugh and Michael Murphy are kept quiet; not allowed to get into scoring zones. Jamie Brennan gets some efforts away but they are all from tight angles and he is barely given a second. Donegal are turned over 19 times in the first half [compared to Mayo's seven] and O'Shea is responsible for five of them. 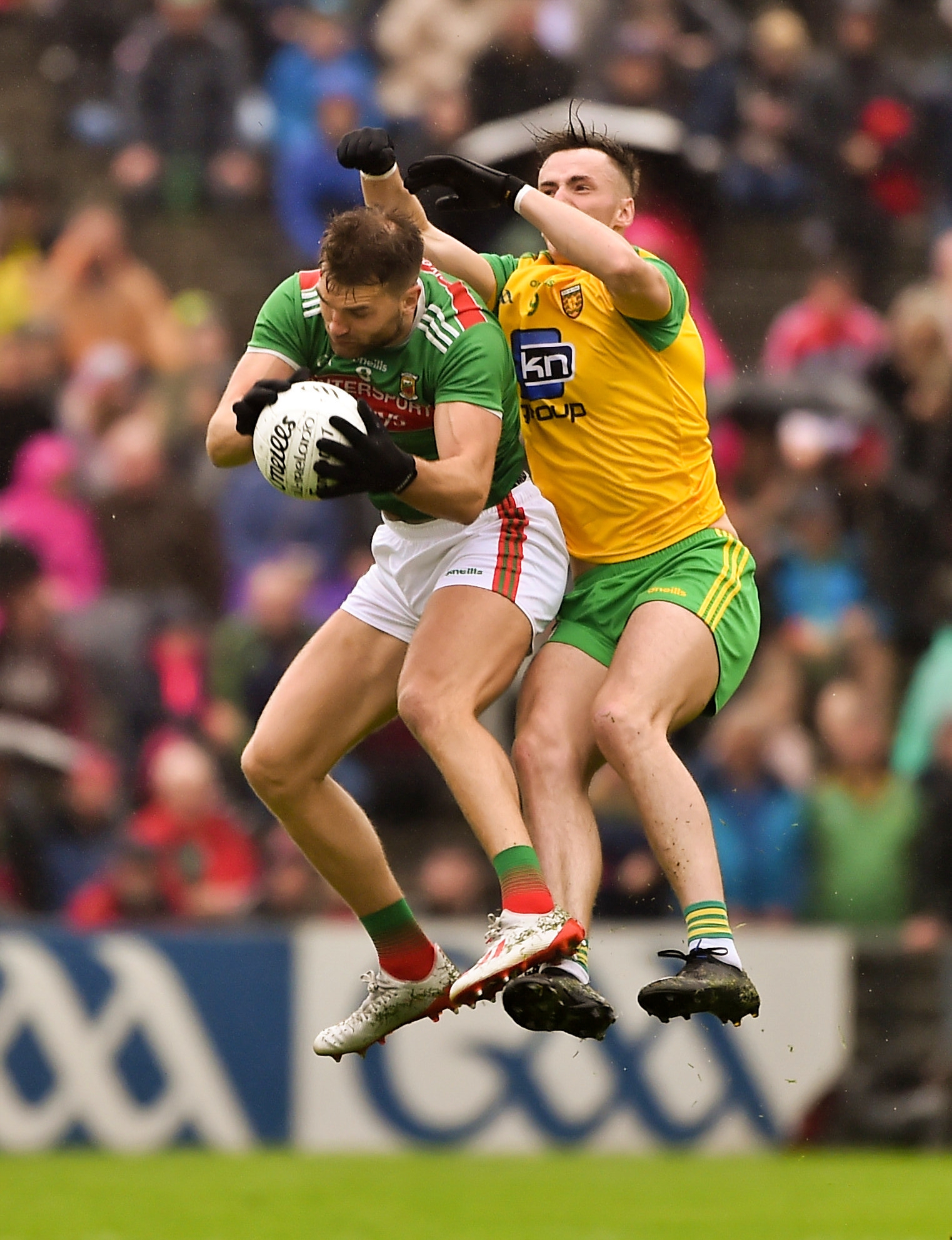 With David Clarke injured, Robbie Hennelly is back in the Mayo goal and O'Shea is his beacon for kick-outs. Not every one sticks but the fighting for scraps is taking place in and around the Donegal half.

Cillian O'Connor's goal has Mayo in the ascendency but Donegal breach their defence but Colm Boyle break-necks over to snuff out the goal-threat and comes away with the ball. 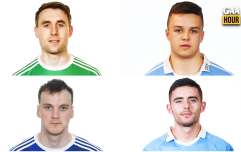 END_OF_DOCUMENT_TOKEN_TO_BE_REPLACED

The half ends with Donegal trying to chisel some points back and turning to McHugh and Murphy. Again it is the O'Sheas, Jason Doherty and Lee Keegan hounding them to within an inch of their life. Donegal go 33 minutes without scoring from play but an O'Donnell score ends that run before Murphy gets the benefit of doubt after tussling under a high ball with Keegan. Murphy is awarded a penalty and he cooly slots it home.

Two points in it and Mayo are left cursing their ever-increasing wide count. They need to secure possession and take the fight to the Ulster champions. O'Shea wins a couple of kick-outs and pilfers the ball from Daire O Baoill and Michael Langan. 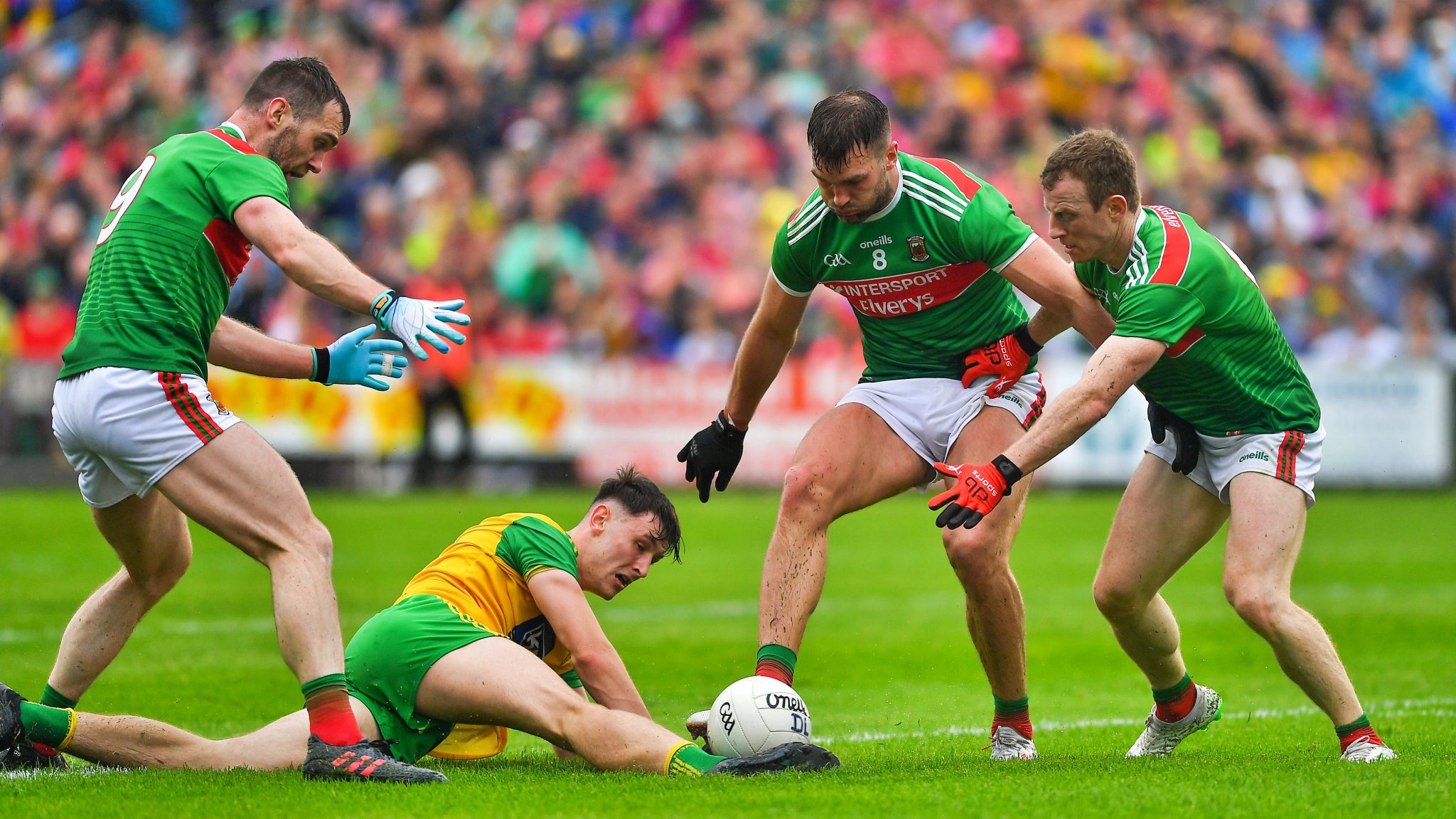 Paddy Durcan is having a cracking game too and his second point from play, added to an O'Connor score, sees Mayo go clear again before Keegan misses a glorious goal chance to seal the win for his side.

In the closing stages, there is small mercy for Murphy as one of his efforts finally soars over the Mayo bar. The lead is just two points and Donegal are on the attack again. Aidan O'Shea hares back to win yet another turnover for his side. Mayo counter and Andy Moran wins a free that O'Connor - crabbing five metres closer to goal - pops over to all but seal the win.

It is another 70+ outing from O'Shea and he is still demanding ball and slowing down play, and keeping his side in control, as the clock ticks down.

Midfield has been where O'Shea has finally settled after years of being horsed up, down and across the pitch. He has put in a couple of good performances over the past two years but Saturday in Castlebar is the best we've seen him since 2017.

The Mayo faithful will hope the Breaffy man can maintain these levels when Mayo return to Croke Park, on August 10, for their eighth All-Ireland semi final in nine years.


popular
Referee Mathieu Raynal puts Sexton in his place after TMO mess
Sexton compares "brilliant" Irish debutant Craig Casey to Jonny Wilkinson
Tadhg Beirne now delivering what so many of us knew he was capable of
Owen Farrell rages at referee Pascal Gauzere as Wales catch England sleeping
Will Connors locks down No.7 jersey with two rapid succession plays
The SportsJOE 12 o'clock quiz | Day 308
QUIZ: How well do you know Manchester United players of the 2010s?
You may also like
1 week ago
25 years after her Mayo debut, 39-year-old Cora Staunton is still scoring for fun
1 week ago
De Búrca keeping positive as Fenton and Hegarty are the top dogs
1 week ago
Cavan make history as Dubs dominate the 2020 Football All-Stars XV
3 weeks ago
Rowe and Sheridan make the magic happen as Irish impact continues Down Under
1 month ago
He'll be remembered as a footballer but Keith Higgins has always been a hurler
1 month ago
Parsons bows out having left everything on the field
Next Page