With an action packed weekend littered with heroes and stars, the public have picked their GAA player of the week

What a weekend of football!

The sun was out in full force, but it was the stars of the championship who ended up shining the brightest.

Jack McCarron, had a freakish first half for Monaghan against Armagh, playing a direct part in three of their goals and scoring the other, he seemed unplayable at times. 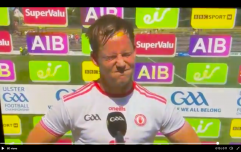 END_OF_DOCUMENT_TOKEN_TO_BE_REPLACED

Kieran McGeary stormed the first 35 minutes against Donegal, when the game was nip and tuck and on a knife edge, he was by miles the stand out player on the pitch, kicking three excellent points from play.

Daniel Flynn lit up Croke Park with an outstanding performance - in fact it was so good, that the Kildare faithful are actually holding out some hope against the indestructible Dubs in the final.

Albeit, it's only a bit of hope, but hope nonetheless.

Despite being on the losing side of the tie, Armagh's Rian O'Neill was absolutely inspirational. He just refused to quit when the chips were down, and on one of the hottest days of the year he managed to stay cool and collected in front of the posts.

Not to mention his outside the boot pass into the full forward line that resulted in the goal was just a thing of beauty.

Usually known for his flair, dead-ball accuracy, and ability to keep the scoreboard ticking, the Crossmaglen man covered every blade of grass, got stuck into heavy tackles, roared in the faces of his opponents and fought right to the end.

It was for that reason, that the public has voted for Rian O'Neill as their GAA Player of the Week.


popular
Brendan Ó Dufaigh gives a powerful interview on an emotional night in Ulster
Jamaica teammates are as frosty after Thompson-Herah's history-making 100m win
Full player ratings as South Africa leave Lions battered, bruised and beaten
Cheslin Kolbe somehow avoids red card after leaving Conor Murray in awful heap
Paul O'Donovan busts the cliches and leaves the mystery behind him in one more emphatic interview
Warren Gatland gives his take on that dangerous challenge on Conor Murray
Down u20 star dedicates Ulster victory to his late teammate in powerful interview
You may also like
2 weeks ago
"We will take that one with a whole drum of salt" - Mickey Harte calls out Martin McHugh's Donegal assesment
2 weeks ago
Paddy McBrearty's last second winner against Derry was like something from a movie
2 weeks ago
"I'm just telling you to mind the language" - Mickey Harte clashes with Oisin McConville over his half-time analysis
4 weeks ago
"People don't realise how hard a decision it actually is" - Seamus Coleman on choosing soccer over GAA
4 weeks ago
Seamus Coleman reveals what current Everton player would make a good Gaelic footballer
1 month ago
"Even if it's a grade one, then he's gone for the Derry game" - Michael Murphy's hamstring concern
Next Page