GAA Director-General Tom Ryan went on the GAA Hour to discuss a number of issues within the association including the All-Ireland senior football championship.

Dublin are going for their fifth consecutive championship this year and 10th consecutive Leinster championship and GAA Hour host Colm Parkinson challenged Ryan on why the association were not doing more to reel the Dublin juggernaut back in.

Tom Ryan: In terms of how the year fared, the attendances are more important, because that's the measure of the popularity really.

Apart from how much money it might bring in, all the commercial stuff and all the broadcast stuff, kind of depends on a vibrant championship.

At the same time I'm very wary of talking things down too. I mean there's plenty of good football played and I'm not really that happy with the idea that football is in a crisis and it needs radical action to change.

There was a little bit of a downer with football over the summer which I thought was a bit unfair. It was a good championship.

Wooly: It was okay. I wouldn't go that far. The big elephant in the room here is that Dublin are hammering everybody. The Leinster championship is a waste of time.

TR: Do you think so?

W: Well Dublin are going for ten in a row. Dublin played Laois in a Leinster championship in 2006 and it was a full house. It was 40,000 last year. Dublin's dominance is turning people off and I think that's very obvious. Once Mayo were out last year people knew that no one was really going to challenge them. That's the reality. Now they're going for five in a row. The question I would have for you is there any sort of strategy in place for if Dublin go 10 in a row?

END_OF_DOCUMENT_TOKEN_TO_BE_REPLACED

W: Well there Games Development money went up in 2018 according to the accounts so you had said that you're going to redress that a little bit?

TR: We did look at redressing it but the way we were going to redress it was that in the way we did; was to look at the funds going to other counties. To be fair, there may be a small bit of a misconception of what that money does or where it goes.

That money is going predominantly to clubs and you know that concept of the club coaches?

W: Yes so every club in Dublin has a Games Development Officer...

TR: Well some of them would share depending on their own means.. 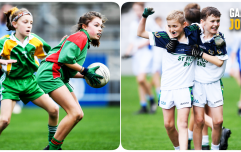 END_OF_DOCUMENT_TOKEN_TO_BE_REPLACED

W: Well other counties don't have that now?

TR: Well it's increasing, so there are a few extra counties that have been added to that mix over the course of the last 12 months. Meath, Kildare, Wicklow, Louth, Wexford, there's one or two others, but what those coaches are doing has no relevance at all to the senior intercounty panel.

They can have really sophisticated backroom teams, and the money which goes to the clubs, which is absolutely disproportionate, now I understand if you go by head of population Dublin's doesn't look that much, and by all means you want these Development Officers into the schools and aggressively challenging rugby and soccer, but they're spending half their time with the clubs and they're helping the clubs as well.

TR: Well again, it comes back to what those people are doing. The predominance of their role is to go into primary schools...

W: That's only half the role, I don't want to talk about that, because I would say that's really good right, because the GAA has to do that but it's the clubs, it's the other half of their work at the club, it's organising junior competitions and all that... clubs in the other counties don't have someone organising that full-time. They have amateurs. I get texts in Portlaoise. Can you help out here? Like a volunteer doing it, Dublin have professional Games Development Officers in every club, organising that, and other counties don't, and I just can't understand how you can stand over them getting €274 per registered player and Tyrone at €21?  That disparity is outrageous!

TR: Most of their time is not actually spent on registered players but you could actually flip that around and talk about the proportion in relation to the general population that don't ever see their way into a GAA club..

END_OF_DOCUMENT_TOKEN_TO_BE_REPLACED

W: I'm splitting them out. I was told their time during the week was split between the schools and the clubs. What split is that then? If it's not 50-50 what is the split then?

TR: It'll vary club by club. It'll vary and I'm not going to mislead you and say that they don't do stuff in the club but the stuff they're doing in the clubs are aimed at 8-12 year old children..

W: No but they're club members at that stage..

TR: A Games Development Officer in Dublin will encounter on an average week boys and girls from the ages of 8-12, going into schools, teaching them the rudiments of Gaelic Games, he's not saying are you a member of Port Laoise? You're not so I'll only talk to the kids that are'...

W: No but I want to make that clear..

TR: It's benefitting Camogie and Ladies Football and it's almost like pseudo-PE by proxy.

W: Colm Begley did it for Parnells so I know exactly what it is. He had to go into schools in the Coolock area which is predominantly soccer. That's a great thing. If these Games Development Officers were 100% doing that I wouldn't have an argument because the Dublin population is massive and you need way more but the issue I have is the time they spend in the clubs and the clubs pay half their wages so they have that.

The problem I have is the rebalancing, and they did adjust Dublin a little bit last year, and then you look at the accounts this year and the actual Games Development has gone up...

TR: It's also gone up for a number of other counties..

W: The other counties need double what Dublin are getting to redress the balance. Like filtering a little more money into these counties... we're talking 10 Leinster's in a row. The Leinster final is 40,000. Like it's just gone so far. Like the stafff wages in Dublin in 2016 was €500,000. Like we're not comparing like with like here at all.

They've a full-time CEO. They've a structure like that, this is just ruining the championship. This is systematic and what will happen is that in 10 more years Dublin will have won eight All-Ireland's, seven or eight of them, and the All-Ireland final could 40,000 like Leinster. Like are you looking ahead at the damage this could be causing?

TR: Well what we would be doing would be taking money out of GAA clubs then and that wouldn't sit right with me at all.


popular
In 86 seconds, Patrick Bamford becomes English football's voice of reason
'Make him hurt, make him yours' - How the Springboks ruled the world
Jose Mourinho is about to step up and become the hero football needs
Springboks legend Tendai Mtawawira tells us what he really thinks of Ellis Genge
Michael Bisping tears into Dillon Danis for 'trying to be Conor McGregor so hard'
"We did find him hours later and we made up." - How Flynn and his best friend came to blows in Croke Park
Football's greatest heist has been happening in broad daylight for years
You may also like
1 month ago
Night to remember for Mackin at TG4 Ladies football All-Stars
1 month ago
"People that get All-Stars aren't just a cog in the wheel. These are the special, outstanding players"
1 month ago
"It's just a really hard thing to step away from" - camaraderie keeps pulling Davey back in
1 month ago
De Búrca keeping positive as Fenton and Hegarty are the top dogs
2 months ago
Cavan make history as Dubs dominate the 2020 Football All-Stars XV
2 weeks ago
McGrath still as energetic as ever even after all these years
Next Page