West Ham United forward Andriy Yarmolenko has opened up about his heated exchange with former Ukraine teammate Anatoliy Tymoshchuk over Russia's invasion of their homeland.

Tymoshchuk, who had held his country's all-time appearance record, was recently stripped of all of his caps by the Ukrainian FA after he refused to condemn Vladimir Putin's decision to attack Ukraine.

The former Bayern Munich midfielder has also been heavily criticised for opting to remain in his position as a coach at Russian top flight club Zenit St Petersburg, where he also had two spells during his playing career.

Yarmolenko confronted Tymoshchuk about his silence over Russia's invasion

Yamolenko played beside Tymoshchuk 42 times for Ukraine. Despite regarding him as a role model, he was so angered by his silence on the war that he decided to confront him.

Speaking to Zorya Londonsk, he said: "I asked him [Tymoshchuk] 'how do you sleep at night?' He replied 'I don’t sleep'.

YARMOLENKO HAD A CALL WITH TYMOSHCHUK

AY: ‘I asked him how do you sleep at night. He replied ‘I don’t sleep’

Then he called me. I told him you used to be a role model for me, now you’re nothing. Then he told me to f*ck off & I told him the same and that’s that’ pic.twitter.com/EQO76HEzCX

'He’s no longer (or ever will be) a legend of Ukraine football.' 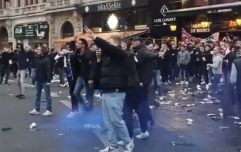 END_OF_DOCUMENT_TOKEN_TO_BE_REPLACED

Despite Tymoshchuk's silence, another of his countrymen, Yaroslav Rakitskiy, who had been playing for Zenit at the time Putin gave orders to launch an invasion, has returned home after terminating his contract.

Atalanta's Ruslan Malinovskyi, whose international career briefly overlapped with Tymoshchuk, has also spoken out about the 42-year-old's decision not to speak out about Russia's action.

Speaking before the Ukrainian FA stripped him of his caps, he warned that he had already damaged his reputation.

"I don't know about Tymoshchuk, you need to ask him," he tweeted, as per the Daily Mail. "[It's] Hard to comment but it’s weird [why he hasn’t said anything] - I think it’s not right.

"It’s 100% the case that he’s no longer (or ever will be) a legend of Ukraine football.

"His previous achievements have been forgotten."

These views were echoed by Yevgeny Levchenko, another former Ukrainian footballer. Tweeting Tymoshchuk directly, he said:

"You are from Ukraine. How can you be silent and continue to work there? We played together for the same team, put on this shirt with pride, sang the anthem, won and lost. Are you just silent now? Tolik, how are you going to live with this?"


popular
Kylian Mbappe reportedly wants PSG to sell Neymar
"The economy was one of the big reasons" - Cadogan's move from an electrician to personal training
Eamon McGee just couldn't help himself with Armagh-melee tweet
QUIZ: Can you name these 50 Premier League players from the 2010s?
Robert Finnerty's strut up to the penalty spot was the stuff of legend
Strongest Ireland team to face New Zealand in Test opener, after squad set-back
Mike Lowry and Peter O'Mahony in First Test contention as Ireland shuffle deck