If United played the top 5 every week they might be alright.

The problem starts when they meet another team who wants the ball as often as they want it - which isn't a lot.

United want the ball when you're in their half and you've left space in your own defence. They want the ball when they can play it in front of Rashford and James and get Martial panicking centre backs. Solskjaer has them truly devastating on the counter - maybe the rest will come - but, for now, United haven't been so good when facing a side inferior to them.

Next up? Bottom of the table Watford.

Surely United will take care of business in that one, right? Right?

It's a tasty bout of televised games coming your way this weekend, not lease Mourinho's face-off with his first love.

There are going to be goals here. Leicester are solid but City are rampant and Brendan Rodgers won't be able to help himself by showing off who is the most exciting manager when he faces off with his idol, Pep.

Last against sixth. United want to counter attack, Watford want to be put out of their misery. Won't be one for the neutral but you'd imagine United will have too much quality in the end. 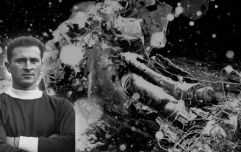 Harry Gregg: the goalkeeper who saved a family

END_OF_DOCUMENT_TOKEN_TO_BE_REPLACED

The last time they met, Derby dumped United out of the Carabao Cup and piled the pressure on Mourinho.

Another home defeat for Lampard's Chelsea sees them stuttering along and, with Spurs feeling good thanks to a late winner at the weekend, it's going to be hard to overlook them in this London derby.


popular
"Emotions will be charged" - Sean O'Brien backing Ireland for Triple Crown
Broadcasting Wilder Fury fight on social media could result in huge fine
Tyson Fury's official purse for Deontay Wilder fight revealed
QUIZ: How well can you remember this season's Premier League results so far?
Tyson Fury reveals what happened when he sparred Anthony Joshua
O'Donnell sees red for standing his ground before O'Connor settles it
“I hope I die every day” - Tyson Fury opens up about his depression and drug abuse
You may also like
6 days ago
Three players Solskjaer wants compared to three Man United are after
1 week ago
Nigeria watches on as Odion Ighalo's Man United dream begins
3 weeks ago
Woodward must "prove us all wrong", not Sanchez
4 weeks ago
Fall guy Solskjaer is not going anywhere
4 weeks ago
If Twitter had been around for Eric Cantona's kung fu kick it might have looked something like this...
1 month ago
Teenage sensation Jude Bellingham facing biggest decision of his career
Next Page