Wilfried Zaha should reject Arsenal - they aren't big enough for him

He's just too good for them

Another summer, another transfer saga linking Wilfried Zaha away from Crystal Palace. In recent years, Tottenham and Manchester City have expressed an interest, but this time it's Arsenal who are sniffing around the winger.

Now 26, this could be Zaha's last chance for a move to a 'big' club. But is Arsenal enough of a step up to justify walking away from Palace? From my admittedly very biased point of view as an Eagles fan, I'm not sure it is.

Arsenal probably don't have the funds to persuade Palace to part with their most prized possession, but let's imagine they eventually cough up the £65m or so to tempt Palace into selling.

Would it be the right move for a player who has earned himself divine status at Selhurst Park?

Arsenal are undoubtedly a bigger club than Palace, that much I'll happily admit. Their stadium, more than twice the size of Selhurst Park, is decorated with the many trophies the Gunners have won over the years.

They reached a European final last season. They can also afford to pay Zaha more money. On paper, it appears to be a logical step up. But Zaha has been burned before, when Manchester United failed to show faith in Alex Ferguson's last ever signing.

And he could very easily get burned again if he makes the decision to join a club who are, frankly, a shambles right now. 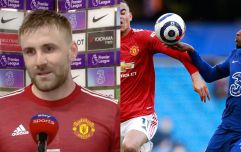 END_OF_DOCUMENT_TOKEN_TO_BE_REPLACED

Arsenal are in a similar position to the United side Zaha left in 2014 - a year into the existential crisis that follows the departure of a long-standing manager.

Nobody is fully convinced that Unai Emery is the right man to lead Arsenal forward after an inconsistent first season at the Emirates. The defence needs a complete overhaul. Arguably their best player has left on a free transfer. And their highest paid player cannot be relied upon to perform in big games, nor can they find a buyer to take him off their hands.

Is that the sort of club Zaha wants to join?

Given that Arsenal seem to be the only suitors for Zaha due to the huge fee Palace are demanding, it seems that the winger has a choice between two options: either he forces a move for the chance to play with the likes of Sead Kolasinac on rainy Thursdays in Azerbaijan, or he could commit to Palace and become an all-time legend, à la Matt Le Tissier at Southampton.

If he chooses the second option, Zaha can cement his God-like status in SE25 and continue to thrive in the loving environment which has proved so conducive to his success.

Were Spurs leading the race for Zaha - a club continually progressing under Mauricio Pochettino, who would no doubt take the forward to the next level - then it would make sense for him to take on the challenge.

Arsenal, on the other hand, can't even offer the lure of Champions League football. They need Zaha more than he needs them right now, and that is reason alone for him to question whether this is really the right move.

popular
The SportsJOE 12 o'clock quiz | Day 309
Robbie Henshaw one of three Irish players deserving of Lions Test XV
Michael O'Leary stands by Gordon Elliott despite "grievous" lapse in judgement
Referee Mathieu Raynal puts Sexton in his place after TMO mess
"I feel it is important to provide people with some context surrounding this photo."
Jamie Redknapp's face after going toe-to-toe with Roy Keane as Matt Doherty caught in the crossfire
Ireland release Craig Casey, Bundee Aki and 11 more back to provinces
You may also like
18 hours ago
Solskjaer hits out at "outside influences" on referees over Man Utd decisions
19 hours ago
Luke Shaw says ref didn't give penalty because it would "cause a lot of talk"
1 day ago
"Embarrassing. Horrendous" - Lewis Dunk slams referee after VAR shambles
2 days ago
LeBron James hits back at Zlatan's 'do what you're good at' comments
2 days ago
Positive injury updates for Liverpool after Jordan Henderson hammer blow
2 days ago
Alfredo Morelos enjoying life as the good guy for a welcome change
Next Page