The prospect of seeing the two greatest footballers on the planet playing alongside each other has got us all very excited.

UEFA are currently holding consultations on how to improve the Champions League and Europa League competitions.

The governing body's big wigs are currently discussing several possible new additions to the tournaments including one that takes a leaf out of the NBA's book.

One of the proposals that's being put forward for consideration is an All-Star game played between two teams voted for by the fans.

The game will be between the best players from the northern and Southern European clubs. The North would consist of players from the top teams in England, Germany, Holland and Russia, while the South would comprise of  the stars from La Liga, Serie A, Ligue 1 and the rest of the Mediterranean leagues.

Each club could only have two or three players togging out for the match and the squads would be voted for by fans online. 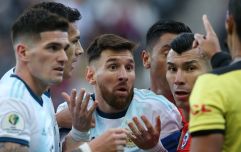 END_OF_DOCUMENT_TOKEN_TO_BE_REPLACED

The obviously means that we could potentially see Lionel Messi and Cristiano Ronaldo playing together in the same side for the first time in their careers. Never before have we thought this was possible outside of the virtual realms of FIFA and Football Manager.

Hat-tip to the Mirror