There was quite a bit of tension at Valencia's press conference on Thursday.

As German defender Shkodran Mustafi entered the room, a club official sat him in front of a bottle of Estrella beer, a sponsor of Valencia CF.

Mustafi, a practising Muslim, requested that the bottle be removed because it is against his religion to endorse the drinking of alcoholic beverages. "Yo no quiero la birra" translates to "I don't want the beer." 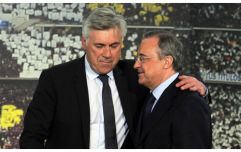 END_OF_DOCUMENT_TOKEN_TO_BE_REPLACED

The Valencia representative denied the request with the valuable sponsorship deal presumably playing on his mind.


popular
QUIZ: How many of the 10 most successful football counties can you name without making a mistake?
Éamonn Fitzmaurice explains Aidan O'Shea's best position and how it can be used against Kerry
Conor McGregor and Floyd Mayweather 'in talks' about a rematch
Matt Le Tissier says he asked Sky Sports why they never sacked Jamie Carragher
Patrick Vieira claims he was 'much better' than Roy Keane in new interview
Steve McClaren issues warning to Man United players
Two All-Ireland quarter-finals to be streamed exclusively live on NOW
You may also like
5 months ago
Real Betis publicly call out refereeing 'disgrace' after contentious draw
9 months ago
"20 seconds of lunacy" sees Joao Felix red-carded against Athletic Bilbao
10 months ago
How losing Lionel Messi could cost Barcelona €137 million
10 months ago
Lionel Messi admits biggest Barcelona regret in emotional press conference
10 months ago
Seven things to watch to quench that football thirst before the new season kicks off
1 year ago
WATCH: All the best goals from gameweek 38 in La Liga
Next Page