This brawl from the Ukrainian Premier League puts the one's we see in English football to... well, shame isn't the right word, I suppose.

Things kicked off in a big way during the clash between Shakhtar Donetsk and Dynamo Kiev at the weekend when the majority of the players on the pitch plus several others became some way involved in a mass brawl.

The fracas began directly after former Arsenal striker Eduardo made it 3-0 to Shakhtar. Some of the Dynamo players didn't take too kindly to how their rivals were celebrating the goal and decided to confront them over it. 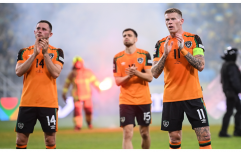 END_OF_DOCUMENT_TOKEN_TO_BE_REPLACED

That was enough to escalate the situation as players and officials from the sideline swarmed in to either try to break up the brawl, or maybe just to join in.

Soon there were mini-brawls began branching off and one fan topped it all off by firing a flare down from the stands onto the pitch.

Unsurprisingly, the referee showed the red card to three players after the incident. If you ask us (which the Ukrainian FA aren't for some inexplicable reason), they were lucky the official left it at just a trio of sending offs.


popular
Get him a tuxedo, give him the All-Star and for crying out loud, someone bring that man out to America
Fans react to Tottenham Hotspur's 'brilliant tease' for Richarlison signing
Southampton pay tribute as Shane Long leaves the club after eight years
Tiernan Kelly and three other players hit with ban following tunnel brawl
The four stone-cold certainties for All-Stars even as early as this
Quiz: Name the players these famous footballers played alongside the most times
Eamon McGee just couldn't help himself with Armagh-melee tweet
You may also like
2 weeks ago
Nathan Collins stuns Ukraine with goal sweeter than Michael Obafemi's
2 weeks ago
Ukraine v Ireland: Team news for Uefa Nations League tie
2 weeks ago
The Ireland XI that should start against Ukraine in the Uefa Nations League tie
2 weeks ago
Ukraine v Ireland: TV channel and team news for Uefa Nations League match
3 weeks ago
Stephen Kenny 'raging' after 'fluke' Ukraine goal beats Ireland
3 weeks ago
Jason Knight's frustration during post-match TV interview sums up Ireland performance
Next Page