Perhaps not, but rest assured that Didier Drogba and Frank Lampard very much do.

The German spent four years on the payroll at Chelsea, where he was teammate of both Lampard and Drogba. After failing to make a proper impact at the club, he eventually left on a permanent deal to Greek side Olympiacos a couple of years ago. 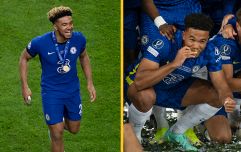 END_OF_DOCUMENT_TOKEN_TO_BE_REPLACED

His name cropped up on Saturday as the BBC looked ahead to Belgium's World Cup game with Tunisia.

Following a feature on Kevin De Bruyne, Gary Lineker asked Lampard and Drogba - both in the studio on punditry duty - how the Manchester City forward had failed to make an impact during his time at Stamford Bridge.

Many have pointed fingers at Jose Mourinho for failing to get the best out of De Bruyne, who left Chelsea to join Wolfsburg in 2014.

Lampard, however, disagrees. Instead, he explained that the depth Chelsea had in terms of attacking players prevented De Bruyne from making a big impression.

"I don't think they missed it [De Bruyne's talent]," Lampard said. "The talent was there. We were there at the time and technically you could see everything he had.

"The problem he had was there was an embarrassment of riches for Chelsea."

Looking across to Drogba, Lampard then started to list the names of some of the players rivalling De Bruyne for a place in the team at that time.

"They had Hazard, Oscoar, Mata, Schürrle..." he began, only to be interrupted by Drogba.

"Marko Marin," he added, enough for Lampard to start to laugh.

Plenty of those watching the coverage picked up this...

Lampard laughing when Drogba brought up Marko Marin as one of Chelsea's young talents... man, harsh!

Lineker: "How did KDB slip thru the net at Chelsea?"

Lampard: "We had an embarrassment of riches. Hazard. Oscar. Mata. Schurrle."


popular
The most Stone Age tackle you've ever seen gets South African lock straight red card
Galway fans' frosty reception for Davy Fitz doesn't make any sense
Michael Schumacher paralyzed and suffering from memory and speech problems
"Johnno went, 'We’re not moving! You're trying to mess us about!'" - Ben Kay recalls red carpet controversy
Ryan Manning hacked to the ground by Henri Lansbury in ruthless assault
'Brian was a genius... he would've killed you to even win a game of touch'
Final question of Ryder Cup press conference has Team USA in all sorts of trouble