WATCH: Chris Sutton takes Robbie Savage to task over his views on Celtic

Chris Sutton has taken Robbie Savage to task over his views on Celtic. Again.

The former Celtic striker and the former Strictly Come Dancing contestant had a debate earlier this week on the quality of the Scottish champions, ahead of their 1-1 draw with Manchester City in the Champions League.

Savage said, among other things, that the current Celtic squad wouldn't be good enough to play in the English Premier League, and they were only good enough for the Championship.

END_OF_DOCUMENT_TOKEN_TO_BE_REPLACED

The BT Sport pundit wouldn't be the first to hold such a view, but it was arguably made redundant by his apparent lack of knowledge on Celtic and Scottish football.

Savage appeared to have no idea that Southampton defender Virgil van Dijk, currently linked with moves to Liverpool and Manchester United, played for Celtic between 2013 and 2015, and he that doubted any players had come south from Scotland to excel in the Premier League in recent years.

He also claimed he'd be able to get a game for Celtic, despite retiring five years ago.

"How is Celtic against Man City the Battle of Britain? It's not, mate," Savage said.

However, Sutton, armed with a cohesive argument and some handy facts, arguably won the debate. 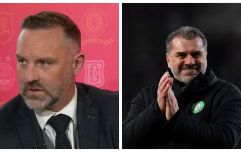 END_OF_DOCUMENT_TOKEN_TO_BE_REPLACED

Part two went along similar lines, and once again Sutton came out with some good lines about his BT colleague.

Sutton said Savage is now more unpopular than Joey Barton in Scotland after his opinions on Celtic, an achievement given Barton's brief, controversial spell with Rangers.

"I got hundreds of tweets, all slaughtering Robbie Savage," Sutton said, before listing some of the players who arrived in English football from Scotland and excelled.

Savage was given the chance to respond later on BT Sport Score, but, once again, found himself outwitted by Sutton.

"Well, recently this is what Robbie said," Sutton began

"He said that Manchester City need a defender, which one would you have Robbie? Robbie said Virgil van Dijk. Where did he play, Robbie? Up at Celtic!"

Savage replied that the Scottish champions were merely a "stop-gap" before he moved onto better things, but had, once again lost the debate.

The @celticfc and Scotland debate continues between Savage and Sutton! #BTSportScore https://t.co/q7tpy1SlK3

When you come at the king, Savage, you best not miss.