WATCH: Bastian Schweinsteiger scores with a clever goal on his return to Manchester United

Bastian Schweinsteiger made his first start for Manchester United in over a year against Wigan Athletic on Sunday afternoon.

The German midfielder last started for the club on January 9, 2016, in an FA Cup tie against Sheffield United at Old Trafford.

After being out of action for long, it was no surprise that Schweinsteiger began the game looking rusty.

However, the 32-year-old set-up United's opening goal with a pinpoint cross to Marouane Fellaini just before half-time. 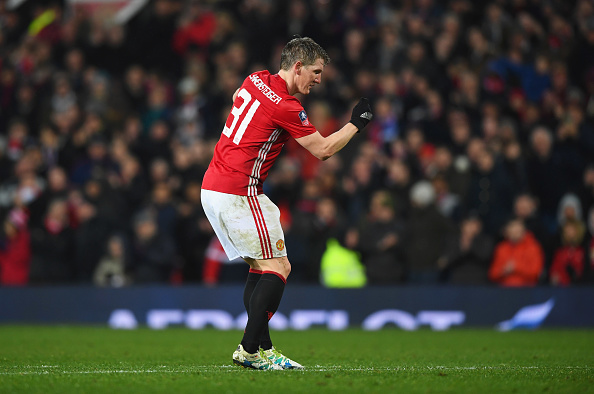 Schweinsteiger rounded-out United's 4-0 victory with a clever finish late in the game, helping secure the team's place in the fifth round of the FA Cup.

United fans and many on social media were delighted for the former Bayern Munich midfielder, who was frozen-out of United's first-team by manager Jose Mourinho at the start of the season.

Many also said he deserved the man of the match award.

Man of the Match: Bastian Schweinsteiger. Welcome back.

Great to see Schweinsteiger playing and scoring. MUFC fans loves him for the way he conducted himself during a difficult non playing time.

Bastian Schweinsteiger: Completed more passes than any other player during Manchester United's 4-0 win against Wigan (103) pic.twitter.com/9yO9hMAmEW

Schweinsteiger assists and scores in his 1st full start in over a year! If he's not 1 of Mourinho's men now then José's a fool #MUFC 4-0!

Schweinsteiger wasn't even included in the team photo. Now he's started a game, assisted AND scored! 👏🏼👏🏼👏🏼👏🏼