VIDEO: Xavi cost his side a place in the Asian Champions league with a horrendous penalty fail

We think it’s a crying shame that Xavi is now playing football in a semi-retirement home in the Middle East.

The former Barcelona man is picking up what we can only assume is a very hefty wage for his new club Al Sadd in Qatar.

The standard is not exactly taxing (see what we did there) by any means, but dozens of players are happy enough to take in some sun, sand and lots of money as they wind down their careers. 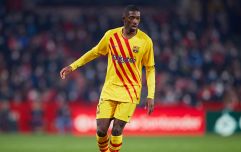 END_OF_DOCUMENT_TOKEN_TO_BE_REPLACED

It sounds like a dream for most professional footballers, but for the ex-Spain international, it turned into a bit of a nightmare this evening as he had a chance to guide the club into the Asian Champions League.

Their game against Al Jazira ended 2-2 after normal and extra-time so it went to penalties. And if there was one cool customer we thought we could bank on to hold his head, it would be Xavi from 12 yards.

We were sadly mistaken however; as his effort went over the bar, and cost his team a place in the Asian Champions League.

He was first up and well, it was an awful attempt.


popular
QUIZ: You have 60 seconds to answer one Premier League goalkeeper question
Boris Johnson slams Jurgen Klopp for defending Liverpool fans booing national anthem
Sean O'Brien could get to play England, at Twickenham, in his final game
Jamie Vardy says 'Wayne Rooney is talking nonsense' about telling his wife to 'calm down'
"I think there are only five Kilkenny players who are guaranteed to start on any given day" - Cody's motivational methods
Gearoid Hegarty's harsh red card leads to a heated debate in The Sunday Game studio
Liverpool and Chelsea fans go viral after bizarre FA Cup final confrontation
You may also like
6 months ago
Xavi set to become Barcelona manager after Al Sadd announced departure
3 years ago
'They are more physical than talented' - Xavi on Kylian Mbappé and Paul Pogba
3 years ago
Xavi's emotional farewell to Andres Iniesta will break your heart in two
4 years ago
Xabi Alonso's insight into the genius of Messi and Xavi is essential reading
5 years ago
Frank Lampard names the best midfielder he played against in the Premier League
5 years ago
Xavi admits Portugal's Euro 2016-winning player-coach Cristiano Ronaldo could win Ballon D'or
Next Page