VIDEO: Behind the TV3 scenes with Kevin Kilbane and Neil Lennon on Champions League night

Imagine a duck paddling under water.

On the surface, it is gliding along smoothly and eloquently. Underneath, it is kicking for all its life.

They tell you that's what a TV production is like but, in actual fact, that was more of an analogy for my day in TV3 trying to pretend like all this wasn't blowing my mind and confusing the hell out of me. 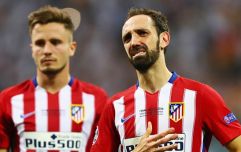 END_OF_DOCUMENT_TOKEN_TO_BE_REPLACED

The work that goes in to the airing of one Champions League night is just frightening. From camera men, to graphics whizzes, to directors, sound guys, teleprompters, replays, stats, make-up artists, flying in pundits, flying others to London and rounding up seven other games all over Europe, it's an eye-opener to say the least.

4pm
There's a production meeting in the gallery where there's around nine and a half million screens and monitors. Approximately. Every single segment, from ad breaks to theme tunes and discussion points are included in the breakdown of how the four hours on air is going to go. Every one of the sections are divided into how long each will take in seconds and who is required to do what in each, it is that detailed.

I nod along. I'm following. I swear. 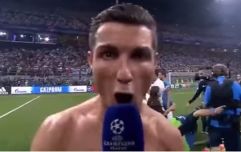 Cristiano Ronaldo screams down the camera, says he had a vision that he'd be the hero, divides the world yet again

END_OF_DOCUMENT_TOKEN_TO_BE_REPLACED

5pm
Work has long since been underway in Ballymount ahead of the Arsenal and Dynamo Zagreb clash. The studio is set up, anyone working on graphics or replays are in place giving their technology the thrice over, the sound engineer is in his own room receiving feeds from five different locations and there is already men in situ at the Emirates with still nearly three hours to kick-off.

I'm sitting in the TV3 cafe making the most of their generous hospitality.

5.30pm
Neil Lennon, Kevin Kilbane and Brian Kerr begin to filter in. There's time for a quick break for the team. Time for seconds for me. 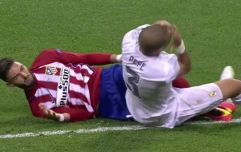 WATCH: A night in the life of Real Madrid's Pepe and his disgusting antics

END_OF_DOCUMENT_TOKEN_TO_BE_REPLACED

6pm
Producer Kieran Holden sits down with Lenny, Killer and Kerrzo (they're my mates now) along with presenter Tommy Martin and they talk through potential discussion topics for the night ahead. They're stuffing their faces too in the Green Room and the rumours about Brian Kerr are true. He does his homework. He comes prepared with a case of his own notes and an iPad already overheating. 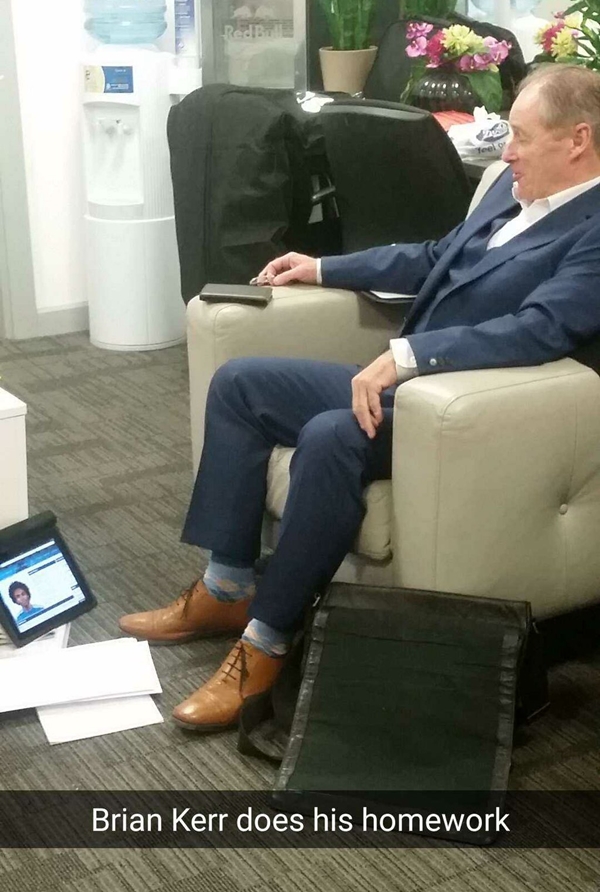 6.15pm
The lads (Lenny, Killer and Kerrzo) are sent up to Marie-Therese Byrne one by one for make-up. All the while, I'm trying to convince myself and them that I'm not starstruck with all of this when I'm forced to act even cooler as an air brush is taken to the faces of some of the island's most renowned sportspeople.

6.30pm
Either Tommy Martin has the most camera-ready face alive or he came with make-up already applied because his turnover time is mightily impressive and he's in position before you know it. He walks the pundits through rehearsals but he's in danger of losing his audience...

We know for a fact that Tommy Martin is better craic than the lads are giving him credit for pic.twitter.com/teeSq73H4N

6.45pm
Meanwhile in the gallery.

6.59pm The show is about to begin and Martin readies that lyrical Donegal voice. Killer has one last giggle to himself.

7pm The show does begin as you'd expect.

A behind-the-scenes look at how the magic happens on Champions League night in TV3 pic.twitter.com/heSd4vf30T

7.45pm The reins are handed over to the Emirates and the men in the studio can relax. 7.55pm I make the hot seat for the half time show. 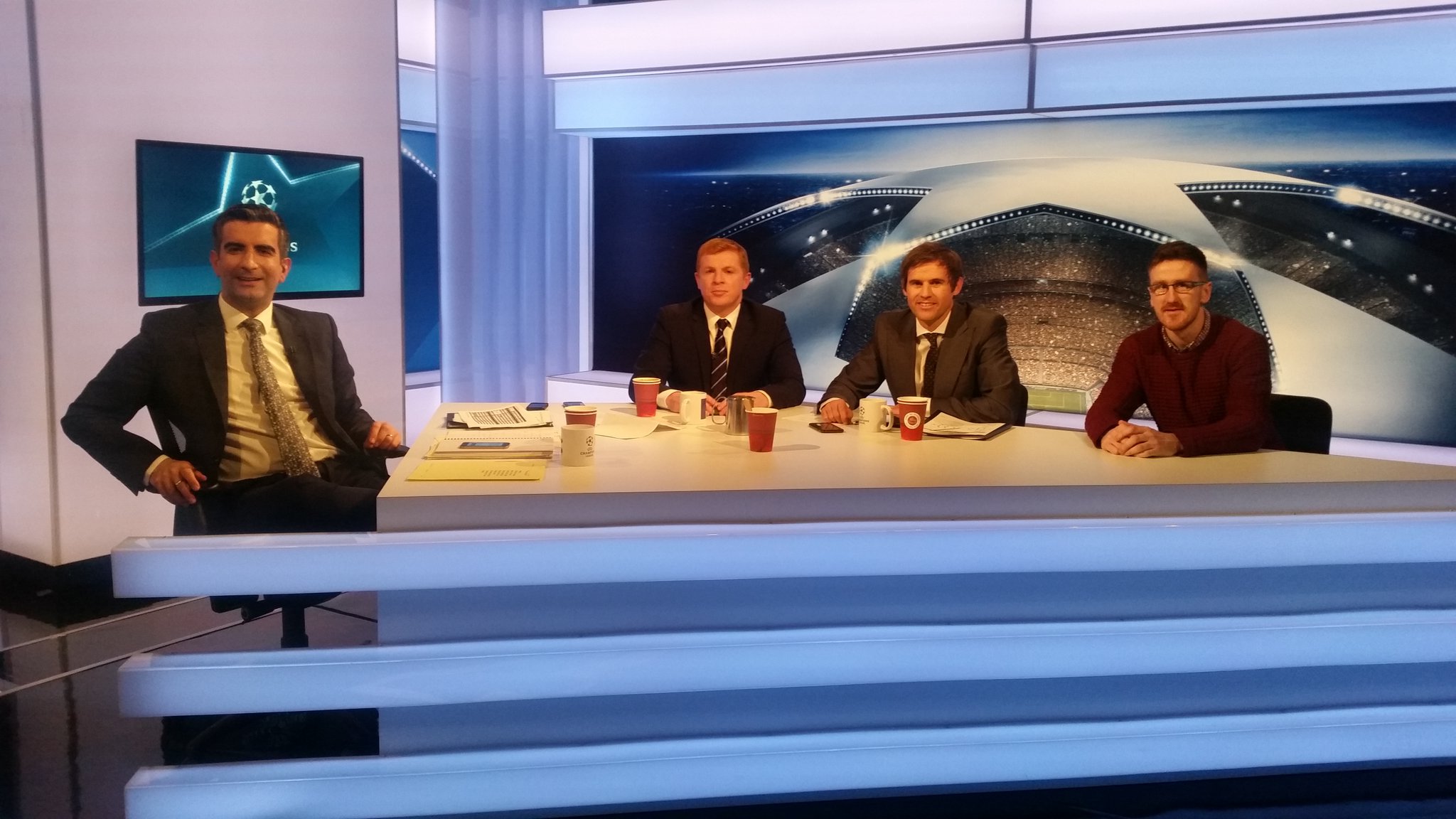 7.56pm I'm turfed off it for refusing to talk about anything other than Jon Walters. 8.05pm  I have a wry smile thinking Neil wishes they had kept me on now.

Nobody leaves Lenny in the corner pic.twitter.com/yi8Pc3xBDo

8.18pm Kevin Kilbane knows exactly what he wants as he readies his half time analysis.

8.25pm
Marie-Therese is back on deck for make-up. Those face-rubs and nose-scratches are beginning to tell.

8.30pm
Half time is here and the whole thing kicks into overdrive again. I'm boiling the kettle.

And we're back for the second half pic.twitter.com/EALul1eGEI

9pm
In a different building, Brian Kerr is watching and dissecting the Chelsea game for the extended highlights after the Arsenal match and he has a production team there with him cutting the game and putting together the package and his analysis.

9.15pm
There will be six more games shown though and there's another team overseeing that. They're under pressure because the Bayern Munich results directly affects Arsenal's standing in the Champions League so those highlights are planned to go out as soon after the main game as they can.

Con Murphy watches the game - along with other matches - picks out the highlights and records the commentary.

9.30pm
Barcelona are breaking the highlights team's hearts. Goal after goal, chance after chance, penalty after penalty. They have to fit a packed 6-1 game into a few minutes worth of TV and they have to get it ready and sent back to the studio in good time. Barca don't make it easy. They're under pressure.

I'm just fascinated being in the same room as Vincent Browne who's preparing for his 11pm show.

9.45pm
If there's a delay in the highlights coming through, Tommy Martin will have to just keep talking. It'll be grand. Would hate to be Tommy Martin in that situation though.

10pm
Brian Kerr rejoins the crew and he's talking them through the Chelsea game. They're under pressure in the gallery trying to get seven extra games slotted in and ready to go on time. Whilst trying to produce what is actually happening on live TV. From the studio, you actually couldn't tell. The duck on the water...

Except the paddling is obviously taking place in poor Tommy Martin's ear who is holding it together like a pro.

11pm
The footage wraps up. I see if Killer and Lenny want to come watch Vinny B with me.