VIDEO: 3000 Schalke fans turned their team training into a scene out of Apocalypse Now

German fans really are a class apart aren't they.

They are loud, good fun and would even give ourselves a run for our money in the passion stakes.

But we don't think even any Irish ultras could compete with what Schalke 04 fans got upto ahead of their sides game with great rivals Borussia Dortmund this weekend. 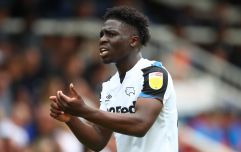 END_OF_DOCUMENT_TOKEN_TO_BE_REPLACED

The meeting of the two clubs is known as the Revierderby, and before the game Schalke fans arrived to the club's training base with flares as they surrounded the pitch to create a scene of the pitch being on fire.

That was impressive enough from a height, until you get pitchside and see how impossible it was for the team to try and train amid all the smoke.

Which we thought might have been a bit counter productive for a team hoping to beat Dortmund on Sunday.


popular
Kerry's captain selection for 2022 sums up the problem with their outdated system
From Canada to Carlow in the name of hurling: Nicolas Redmond's journey to the Fitzgibbon Cup
"It must be difficult to say no, having won a game and heading back together"
Chelsea forced to change Stamford Bridge changing room after Liverpool complaint
Eddie Jones shares great tale on hour-long chat with 'inspirational' Roy Keane
Jesse Lingard 'angered by lack of respect' shown by Man United
Ireland fitness update offers even more reason for Six Nations optimism
You may also like
3 months ago
Borussia Dortmund CEO issues explicit response to Erling Haaland transfer suggestion
5 months ago
Seven things to watch to quench that football thirst before the new season kicks off
10 months ago
Xabi Alonso set for first managerial role in Bundesliga
1 year ago
Marcus Thuram apologies after spitting in the face of opponent
2 years ago
Kai Havertz: The rising star chased by Manchester United, City and Liverpool
2 years ago
Bayern Munich, in their kindness, are letting Mats Hummels go back to Dortmund
Next Page