In the hours after Donald Trump's election, it must have been difficult for a lot of Americans to think straight, let alone prepare for a crucial sporting event.

It feels like a sadistic joke that the United States men's national soccer team is to take on Mexico on Friday, just days after the election of a man who pledged to build a wall on the border of the two countries.

But they have had to turn their attentions to the match, and captain Michael Bradley is preparing to lead out a team which could realistically include both Michael Orozco and Omar Gonzalez, American internationals of Mexican descent who play their club football south of the border.

Mexico, meanwhile, have one current MLS player in LA Galaxy's Giovani dos Santos as well as former New York Red Bulls player Rafael Marquez. The sport is a place for rivalry, but can also offer a unifying factor between the neighbours.

Former Aston Villa midfielder Bradley, currently with MLS Eastern Conference finalists Toronto FC, was tasked with speaking to the press ahead of Friday's World Cup qualifier at the Mapfre Stadium in Columbus.

And he responded with measured, respectful comments befitting of the wearer of the armband, calling for every single attendee to be given respect by their fellow supporters, regardless of background. 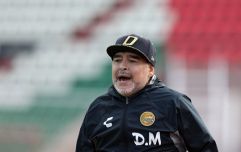 END_OF_DOCUMENT_TOKEN_TO_BE_REPLACED

The footballing rivalry between the United States and Mexico is among the world's biggest, though the US did El Tri a favour in qualification for the last World Cup by beating Panama to help their rivals make it to the finals in Brazil.

Both countries will hope to progress from the 'Hexagon' stage of qualifying among North and Central American and Caribbean nations, where six teams play each other twice, with the top three making it to the 2018 tournament in Russia and the fourth-placed side making the playoffs.

The other four nations still in the mix are Costa Rica, Honduras, Panama and Trinidad & Tobago.
The GAA Hour chats to Ballyea sensation Tony Kelly and features a raging argument over which road you should take from Clare to Wexford. Subscribe here on iTunes.


popular
QUIZ: Can you name the Football Italia cult heroes? | Part 2
The SportsJOE 12 o'clock quiz | Day 72
Justin Gaethje tells Conor McGregor to wait his turn
SportsJOE 2000s Football Quiz | Round 3
Only a true nerd will get full marks in our 2016 football quiz
SportsJOE 2000s Football Quiz | Round 2
The SportsJOE 12 o'clock quiz | Day 71
You may also like
1 year ago
Marcelo Bielsa has already rejected the chance to leave Leeds
1 year ago
Mexican team scores while opposition celebrate offside goal
1 year ago
Manchester United move for Mexico World Cup star gathers pace
1 year ago
Diego Maradona criticises Neymar for 'clowning' during Mexico win
1 year ago
Alan Shearer speaks for everyone with tweet about Neymar's OTT reaction
1 year ago
Neymar sunk to new levels of embarrassment with his antics against Mexico
Next Page