UEFA have defended their decision to award just 45, 226 tickets to fans for the finals of both the UEFA Champions League and UEFA Europa League.

Arsenal will take on Chelsea in the Europa League final in Baku on the 29th of May while Liverpool will play Tottenham in the Champions League final in Madrid on the 1st of June.

Liverpool manager Jurgen Klopp and Spurs boss Mauricio Pochettino have both condemned the measly allocations and UEFA responded to the final in Baku by claiming that they cannot account for demand from fans before the final.

"Of course, it is impossible to predict in advance which clubs will reach the final, while the venue has to be chosen around two years in advance.

"Taking into consideration the above and, most importantly, the geographical location and logistical capacity of airports in and around the host city, it was deemed that around 15,000 spectators would be able to travel from abroad.

"Offering more tickets to fans of the participating teams, without any guarantee that they would be able to arrange suitable travel to reach Baku, was therefore not a responsible option.

"Based on these circumstances, for this year's UEFA Europa League final in Baku, 6,000 tickets have been made available to each of the finalists.

"UEFA remains in close contact with the finalists regarding the travel arrangements of their supporters and any other operational aspects with regards to the final." 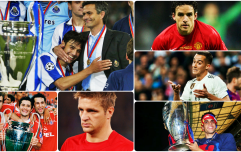 Can you name these Champions League-winning players from the last 20 years?

END_OF_DOCUMENT_TOKEN_TO_BE_REPLACED

Meanwhile, with regards to the Champions League final in Madrid, UEFA claim that the remaining 25,500 tickets at the Estadio Metropolitano stadium have been put aside for the local organising committee, UEFA and national associations, commercial partners and broadcasters, and to serve the corporate hospitality programme.

'A total of 38,000 tickets out of 63,500 (the stadium’s capacity for the final) are available for fans and the general public to purchase. The two teams who reach the final will receive 17,000 each, while 4,000 tickets are being offered for sale to fans worldwide via UEFA.com.

'The remaining tickets are allocated to the local organising committee, UEFA and national associations, commercial partners and broadcasters, and to serve the corporate hospitality programme with new packages available'.