The incident occurred after the first goal

A Tottenham Hotspur fan has been arrested after a banana skin was thrown towards Pierre-Emerick Aubameyang as he celebrated his first goal during the north London derby on Sunday afternoon.

Images from the Emirates showed the banana skin lying on the turf after Aubameyang opened the scoring from the penalty spot in the 10th minute.

END_OF_DOCUMENT_TOKEN_TO_BE_REPLACED

In a statement, a Spurs spokesman said: “Behaviour such as this is completely unacceptable and the supporter in question will be issued with a ban.”

The FA will investigate the incident, even if it is not included in Mike Dean's match report. The metropolitan police on Sunday night said a man had been arrested for throwing a missile onto the pitch, which is understood to be the banana peel.

Six other arrests were made in relation to the match, including two Arsenal fans after smoke canisters were lit during the second half, when Arsenal came from 2-1 down to win 4-2.

The six-goal thriller was largely entertaining for the neutrals, bar this unsavoury incident. 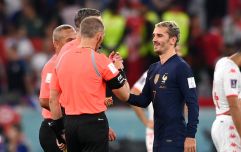 END_OF_DOCUMENT_TOKEN_TO_BE_REPLACED

Players also clashed during the first half when Eric Dier's celebration provoked Arsenal players which led to a touchline fracas. Aaron Ramsey and Dele Alli had to be held apart, as Mauricio Pochettino raced down the touchline to play peacemaker.

“In that moment, it was to try to put calm in our play,” the Spurs manager said. “At 1-1, it was a massive fight there but I did not know what was going on in that moment. And in the moment that I arrived, it was all relaxed, calm.

“I did not know what happened but sometimes these situations happen. My intention was always to put calm. I don’t know if it was the celebration of Dier. I don’t know what upset some people there or some players that were doing the warm-up. I really don’t know and I didn’t ask at half-time.

“I promise, in the half-time I didn’t ask and now there is no time to ask. I think the cameras are there and we will see what is going on. In that moment I think the team score and the energy is on our side and to keep that energy is to try to be clever. OK, celebrate and then try and go back to play.”