Fernando Torres could be in line for move to Newcastle

It's still uncertain where Fernando Torres will be playing his football next season.

The 34-year-old confirmed last month that he will leave Atletico Madrid in the summer having rejoined his boyhood club in 2015.

Since announcing his departure, he has been linked with money-spinning moves to the United States, China and, more recently, Japan. With Steven Gerrard set to take over as the next Rangers manager, there was even some speculation that Torres could link up with his former Liverpool teammate at Ibrox.

However, it's now being reported that Torres could be in line to join up with Rafa Benitez - his former manager at Anfield - in a move to Newcastle United.

Although Benitez is yet to commit to a third full season on Tyneside, he has prioritised the signing of a new striker over the summer and would welcome the chance to sign Torres - despite believing he is more likely to experience playing in a new country and culture.

After loaning Islam Slimani from Leicester City in January, the Daily Mail report Benitez is unlikely to re-sign the Algerian. The report adds that the addition of Torres, however, would be of interest to Benitez. 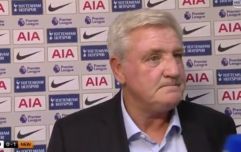 END_OF_DOCUMENT_TOKEN_TO_BE_REPLACED

"Fernando is a great player," Benitez said recently. "He's an icon, an idol at Atletico Madrid and I have lots of happy memories with him."

Torres was signed for Liverpool by Benitez in 2007, establishing himself as a key player for the Merseyside club. Benitez left in 2010, and Torres was sold to Chelsea in 2011. The pair were briefly reunited at Stamford Bridge in November 2012, when Benitez replaced Roberto Di Matteo as interim manager for the remainder of the 2012/13 season.

Benitez is believed to be seeking assurances over investment in the squad before committing to another season with Newcastle. He has urged Ashley to finally break the club's existing transfer record, which stands at £16m following the arrival of Michael Owen from Real Madrid in 2005.

popular
Portumna prodigy streaks to eight shot Irish Boys win with bogey free round
"No doubt he'll say he played shit like he normally does, but I thought it was a good game."
The SportsJOE 12 o'clock quiz | Day 144
The SportsJOE 12 o'clock quiz | Day 143
SportsJOE 2000s Football Quiz | Round 12
Three teams Leinster can pit against each other to prepare for Munster
Brooks Koepka puts PGA Championship leaders on notice with final round comments
You may also like
1 year ago
Jose Mourinho 'ready for talks' over becoming next Newcastle manager
1 year ago
Mike Ashley in talks to sell Newcastle to City owner's cousin
1 year ago
Report: Mike Ashley finalising sale of Newcastle United
1 year ago
Rafa Benitez admits he "cannot win" when Newcastle play Liverpool
1 year ago
Jordan Pickford somehow evades sending off after rugby tackling Salomon Rondon to ground
1 year ago
Marco Silva confronts referee after Everton blow two goal lead at Newcastle
Next Page