"What do you expect? That we dominate Liverpool during 90 minutes?"

Toni Kroos has shed more light on why he decided to walk away from an on-pitch interview with a German journalist, seconds after helping Real Madrid to a Champions League final victory over Liverpool.

Kroos had agreed to speak to a reporter from ZDF shortly before the trophy lift in Paris, but swiftly cut the chat short after taking issue with the questions being asked.

END_OF_DOCUMENT_TOKEN_TO_BE_REPLACED

It was put to the midfielder that, despite their victory, Liverpool had put Carlo Ancelotti's men under cosh throughout the game.

This was a completely fair point: Liverpool had managed 24 shots throughout the game compared to Real's four but had found Thibaut Courtois in inspired form to keep them at bay.

Kroos, though, wasn't too pleased with the negative focus of the questions, not when he and his teammates had just won the biggest prize in club football.

"You had 90 minutes and you come up with two shit questions," he said, shaking his head. "Two negative questions, you can tell right away that you're German."

Despite attempts to continue the interview, Kroos had had enough.

Kroos on why he cut the interview short 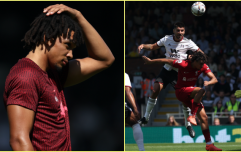 END_OF_DOCUMENT_TOKEN_TO_BE_REPLACED

Nearly a week on, Kroos has explained what happened on the Einfach Mal Luppen podcast.

"You can ask: 'How did you watch the game? I wouldn't have said we put them against the wall from the first minute until the 90th minute," he explained.

"I'm the first to say it was a close game and Liverpool probably had some more chances. But we won the game... I don't give a shit in a final, you have to win it.

"At the time I was just pissed off. I was pissed off at him. Of course we had to go through two or three pressure phases , I also told him that when he asked the question. But that's normal.

"What do you expect? That we dominate Liverpool during 90 minutes? They're a world-class team. We had to beat them and that's what we did."

Much of the talk since Real's 1-0 win has been about the shambolic scenes which supporters of both sides were met with outside the Stade de France.

Though French ministers tried to place blame on Liverpool supporters, Real Madrid have now released a statement demanding answers after some of their fans were caught up in the chaotic scenes.