Raheem Sterling is the only Englishman nominated

The PFA Men's Player's Player of the Year shortlist has been released, with half of the nominations going to Manchester City players.

The nominees for the PFA Players’ Player of the Year!

END_OF_DOCUMENT_TOKEN_TO_BE_REPLACED

Last year's winner Mohamed Salah does not make the shortlist.

The Men's Young Player and Women's Player of the Year shortlists have also been revealed.

The nominees for the PFA Young Player of the Year! 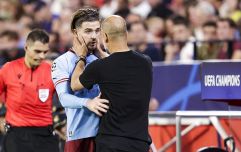 END_OF_DOCUMENT_TOKEN_TO_BE_REPLACED

Manchester City also dominates the Women's list, with the trio of Steph Houghton, Nikita Parris and Keira Walsh all getting the nod. Chelsea's Erin Cuthbert and Ji So-Yun and Arsenal's Vivianne Miedema also make the cut.