Leicester City's pre-season title odds have been the subject of so much discussion that you could be forgiven for thinking '5000/1 shots Leicester City' was the name of the team.

We've read about the cashouts and the comparative odds, while we've also learned that Claudio Ranieri's team are longer odds to retain their title than to get relegated next season.

But now we can see how that initial 5000/1 came all the way down over the course of the season, thanks to this game-by-game chart from bettingexpert.

Not only were the Foxes huge outsiders to win the league based on bookies' odds, but the chances of Wes Morgan lifting the trophy aloft were less than 1 percent right up until the 3-0 victory at Swansea in December.

In fact, it was arguably the Jamie Vardy-inspired victory over Liverpool in February which convinced people it was more than just a pipe dream.

That win, coupled with Arsenal's goalless draw at home to Southampton, saw Leicester's odds drop to single figures for the first time all season. 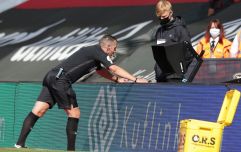 END_OF_DOCUMENT_TOKEN_TO_BE_REPLACED

Other teams might have been close to odds-on at that stage, with a three-point lead and just 14 games remaining, but Ranieri's team were still 5/1. It was not until March 14, when victory over Newcastle extended the lead to five points with eight to play, that Leicester were considered more likely than not to win the league.

Here's how it played out throughout the campaign.


popular
"I did enjoy Roy Keane absolutely sh*tting his pants when someone tougher than him challenged him"
You'd be doing extremely well to get 100% in this US sports badge quiz
The SportsJOE 12 o'clock quiz | Day 192
Josh van der Flier recalls first Leinster training session with Brian O'Driscoll
Johann van Graan addresses talk of Munster return for Simon Zebo
The SportsJOE 12 o'clock quiz | Day 193
Marc Ó Sé: Split the season, give Tony Brosnan his Kerry chance
You may also like
2 days ago
SportsJOE 2000s Football Quiz | Round 17
3 days ago
Absolute chaos as Spurs hit with 96th minute penalty for no-look handball
4 days ago
QUIZ: Can you name the first signings of these famous managers?
4 days ago
Bruno Fernandes rescues rag-order United
6 days ago
"I have to select players in better condition" - Arteta on Ozil
1 week ago
QUIZ: Can you name every player to score four goals in a Premier League game?
Next Page