The Unite the Union Champions Cup will get underway in November.

The Unite the Union Champions Cup will be played for the first time in November.

Linfield, who won this season's Danske Bank Premiership, will take on the SSE Airtricity League champions over two legs. 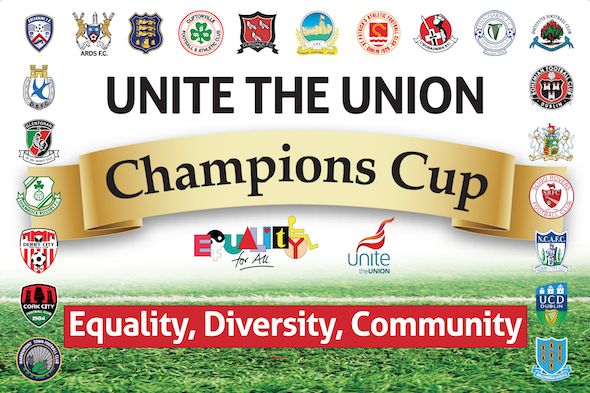 END_OF_DOCUMENT_TOKEN_TO_BE_REPLACED

The competition will be the first cross-border tournament since the Setanta Cup, which was played between 2005 and 2014. It will be sponsored by trade union Unite, who have signed a three-year deal to support the competition.

The winners of the inaugural Unite the Union Champions Cup will get €50,000, the runners-up will earn €25,000 and a further €25,000 has been ring-fenced for community-based projects in the competing teams' local areas.

"We're delighted to formally announce the Unite the Union Champions Cup and we're extremely excited for the competition to begin.

"I'd like to thank the IFA, in particular Patrick Nelson, who have been fantastic to work with on the project and it's great to see a cross-border tournament return. The clubs and players in the SSE Airtricity League are incredibly excited to see a competition like this back on the domestic calendar.

"I'd also like to thank Unite, in particular Brendan Ogle and his colleagues, for their sponsorship of the tournament and the community work they're committed to as part of the competition, both north and south of the border. It's a unique sponsorship and we're looking forward to help promote Unite's equality agenda."

"This is a fantastic new cross-border competition and one that I am sure will capture the imagination of football fans right across the island of Ireland.

“I would like to thank Unite the Union for their sponsorship, especially for ring-fencing a significant sum for community projects. This is a competition that will bring people together and one that will have lasting benefits for clubs as well as fans.”

A video has also been released promoting the new tournament: