The team Stephen Kenny should start against Serbia

The bookmakers rarely get it wrong and the 5/1 being quoted for Ireland to beat Serbia this Wednesday night gives us all a cold dose of reality.

No matter what way you look at it, Irish football is not the force it once was with this fall from grace is reflected in our players' status in the game. Only 11 of the 29-man squad heading to Belgrade are Premier League players with fewer still first choice at their top tier clubs.

It goes a long way to summing up the tough task at hand for Stephen Kenny and co. as they bid to make it to the World Cup, a task that has been made even tougher by some cruel recent luck with injuries.

The stats have not been favourable for the new manager in his first eight games but there had been some positive signs, namely a more comfortable feel in possession of the ball. Possession doesn't move the scoreboard though and the bottom line is that Ireland's attacking players must become more clinical when the chances come.

"My frame of mind is I want Ireland to get to the World Cup" 🇮🇪 pic.twitter.com/K7uYm963jm

For this job, we are entrusting Shane Long with the responsibilities. The Tipp man has scored twice in eight games for his new club Bournemouth and his pace, strength and aerial ability will give Serbia more headaches than the alternatives.

END_OF_DOCUMENT_TOKEN_TO_BE_REPLACED

Jayson Molumby and Jason Knight are our holding midfielders with Robbie Brady picked in a more advanced role. Matt Doherty misses out but will be an option from the bench as will Troy Parrott and potentially James Collins.

Despite the long list of injuries, it's still a moderate line-up with Enda Stevens and Aaron Connolly potentially forming a dynamic pairing on the left hand side. 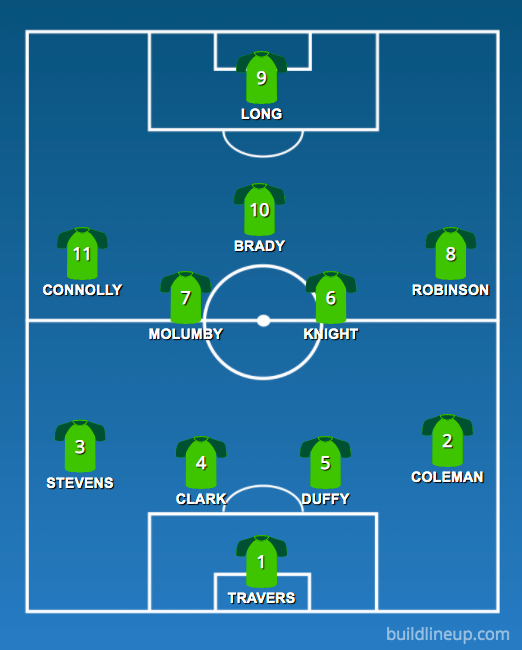 
popular
The Garry Ringrose narrative around the Lions Tour is complete bull
Gatland comments give insight as to why CJ Stander missed Lions call
The SportsJOE 12 o'clock quiz | Day 347
"Original Conor McGregor" Nick Diaz recounts heartwrenching story of his girlfriend's suicide
Lions XV that should start the First Test against South Africa
Courtney Lawes and Jack Conan were the Lions 36th and 37th men
The English media reaction to Lions squad announcement was suitably spiky
You may also like
1 month ago
30 seconds of Stephen Kenny firing bullets
1 month ago
Brighter days ahead for impressive young Bazunu
1 month ago
Brian Kerr had seen this coming from miles away, we just weren't ready to hear it
1 month ago
"It's a shocking result... That's on us. We should be embarrassed" - Seamus Coleman
1 month ago
Full Ireland ratings after pitiful home defeat to Luxembourg
1 month ago
Gavin Bazunu starts in goal as Ireland team to face Luxembourg named
Next Page