United were 2-1 winners at the London Stadium thanks to goals from Cristiano Ronaldo and Jesse Lingard, although the Red Devils' triumph did not come easy.

END_OF_DOCUMENT_TOKEN_TO_BE_REPLACED

West Ham took the lead in the first-half through Said Benrahma's deflected effort, only for Ronaldo to level not long after.

It looked like the game was heading for a draw before substitute Lingard - back at West Ham for the first time since his impressive loan spell last season - curled a strike into the top corner.

However, the drama was not quite over as David Moyes' side were awarded a penalty as Andriy Yarmolenko's attempted cross hit Luke Shaw's outstretched arm - with VAR deeming it worthy of a review, with the penalty awarded soon after.

Staggeringly, though, the Hammers sent on club captain Mark Noble to take the spot kick.

The risky decision failed to pay off as David De Get stood strong to save the penalty and ensure United secured all three points.

Thoughts on the decision to bring Mark Noble on to take #WHUFC's penalty? 😬 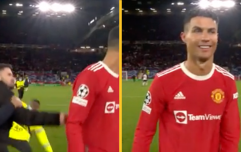 END_OF_DOCUMENT_TOKEN_TO_BE_REPLACED

Despite winning the match, Solskjaer felt that his side should've been awarded a number of penalties after the Portuguese captain went down in the box on three occasions.

Whilst the United manager didn't quite agree with Ronaldo's belief that they should've been given three penalties, he certainly believes that they deserved two.

When asked how many penalties he thinks the Red Devils should've had, the Norwegian responded: "Two."

"The first and the last, I think they're stonewall," he added. "You can't even argue against them."

The 48-year-old then went on to describe and explain why the two penalty-related incidents should have been awarded.

"The first one, the lad puts his foot out and Cristiano runs straight and he's fouled," said Solskjaer.

"The last one, Paul [Pogba] had a foul against him... Kourt Zouma, he didn't touch him but he went over him, so why is Cristiano's third appeal not a penalty?

"Hopefully it won't be that Cristiano is never going to get a penalty."

Whilst Ronaldo may have not awarded a penalty against West Ham, he has still started life back in a United shirt in spectacular fashion having now scored four goals in his first three appearances.


popular
Paul Scholes calls a spade a spade after comeback win
It's often forgotten that Tommy Walsh began his career with the same stardom and promise as David Clifford
Derry club win county final factfile games with extravagant set of jobs
Jordan Larmour primed for a season to remind everyone how good he is
Shane Walsh: 'That's not how I was coached to play football. No one was coached to play football that way'
Paul Scholes says Paul Pogba is a "daydreamer" and Fred and McTominay are "limited footballers"
Spicy Donegal semi-final the highlight of a rip-roaring weekend of GAA on the tv
You may also like
21 hours ago
Paul Scholes calls a spade a spade after comeback win
2 days ago
Ole Gunnar Solskjaer responds to stinging Jamie Carragher criticism
2 days ago
Jamie Carragher believes that Manchester United need a better manager than Ole Gunnar Solskjaer
2 days ago
Marcus Rashford's camp reportedly upset by Solskjaer's over-reaching comments
3 days ago
Man United aren't good enough to accommodate Ronaldo's refusal to work
4 days ago
Micah Richards makes damning claim about Man United under Solskjaer
Next Page