Ole Gunnar Solskjaer has hit out at his players' reaction to an embarrassing 4-0 defeat to Everton on Sunday and suggested that some of them will not be at the club next season.

Solskjaer apologised to Manchester United's away supporters after the defeat at Goodison Park - United's sixth in eight games - and it has prompted a furious reaction from pundits, including Gary Neville and David Moyes.

Asked if his players reaction in the dressing room afterwards had shown they cared about playing for the club, Solskjaer puffed out his cheeks and replied: "I don’t know, I don’t know."

Then asked if they cared as much as him about the club, he added: "You’ve got to ask them. I’ve asked them. You’re not going to get the answer from me.

"Of course, if you want to play at this club it has to mean more. I want my team to be the hardest-working team in the league.

"That’s what we were under Sir Alex, that’s what we’ve always been, you’ve got Giggsy, Becks, Gary Neville, Denis Irwin, whatever the talent you’ve got you’ve ran more than anyone, every single week, put in a shift up and down that pitch for your teammates." 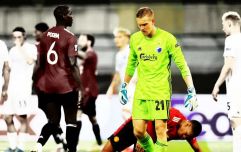 United through but impenetrable goalkeeper has everyone enquiring

END_OF_DOCUMENT_TOKEN_TO_BE_REPLACED

Continuing, Solskjaer implied that some of his players would be unlikely to still be at the club next season.

"We have to stick together as a team, we can’t change the whole squad, it’s one step as a time," he said.

United will now need to win all their remaining games - starting with Wednesday's derby against Manchester City - to stand any chance of finishing in the top four.

popular
"No doubt he'll say he played shit like he normally does, but I thought it was a good game."
The SportsJOE 12 o'clock quiz | Day 144
The SportsJOE 12 o'clock quiz | Day 143
SportsJOE 2000s Football Quiz | Round 12
Three teams Leinster can pit against each other to prepare for Munster
Only a Champions League fanatic would get full marks in this quiz
Brooks Koepka puts PGA Championship leaders on notice with final round comments
You may also like
1 day ago
QUIZ: Name every 2019/20 Premier League goalscorer from Scotland
1 day ago
Dortmund secretly extended Jadon Sancho's contract last summer
2 days ago
SportsJOE 2000s Football Quiz | Round 12
2 days ago
Liverpool edge ahead of Leicester in battle for Olympiakos star
3 days ago
Pirlo's Juventus appointment proves it's not what you know, it's who you know
3 days ago
Getting 20/20 in our Champions League quiz would be a miracle
Next Page