Manchester United fans gained access to the squad's training facility to protest against the club's owners, in the aftermath of United's involvement in the Super League fiasco.

Around 20 fans were able to make their way into the facility and unveiled banners reading "WE decide when you PLAY," "51% MUFC 20," and "GLAZERS OUT."

The "51%" is a clear reference to the ownership model currently in place in German football in which fans must hold the majority of voting rights at a club. Many are calling for similar measures and regulation over club ownership to be brought into English football now.

This is in the aftermath of the scandalous power grab from the owners of the Premier League's so-called 'big six' who announced on Sunday their intentions to from a breakaway Super League tournament with six of Europe's elite sides.

The Mail reports that manager Ole Gunnar Solskjaer, first-team coaches Darren Fletcher and Michael Carrick, and midfielder Nemanja Matic all came out to speak to the angry fans after they made their way into Carrington.

A statement from United has now said that the buildings at the training ground "were secure and the group had left the site."

#mufc fans have blocked the entrance to Carrington in protest against the Glazer family's ownership of the club #mulive [mirror] pic.twitter.com/7WsR2Lt2Lc 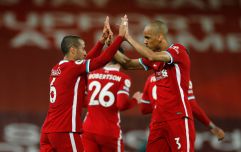 END_OF_DOCUMENT_TOKEN_TO_BE_REPLACED

In a rare public address from the club co-chairman, Joel Glazer admitted to fans in a letter that he had 'got it wrong.'

He wrote in the letter to supporters that his role in the proposals had 'failed to show enough respect for [football's] deep-rooted traditions' and that he was now 'personally committed to rebuilding trust with our fans'.

However for the majority of United fans this will be too little too late, and is the final straw for their owners who have faced opposition from large groups of supporters ever since they became involved in the club.


popular
Names beginning to emerge from Lions stand-by list for South Africa
The SportsJOE 12 o'clock quiz | Day 351
"I'd play it in the back garden if I could. We've been training for this since last September"
Player ratings as Man United and Liverpool play out goalless draw
Finally, Gaelic football is returning to our TV screens - what's on and where?
"Some people just have different passions" - Geezer sees where Clarke is coming from
"I’d love to do my Colin Corkery impression and play Junior B football. It depends on the body"
You may also like
1 day ago
Jürgen Klopp defends Solskjaer's team selection calls after United defeat
3 days ago
Manchester United supporters stand their ground after letter from Joel Glazer
1 week ago
Ole Gunnar Solskjaer "unhappy" with Gary Neville over anti-Glazer backlash
1 week ago
Jamie Carragher hits out at 'lazy punditry' after Man United protest
1 week ago
"Jack Grealish would be brilliant for Man United... he has to be selfish" - Roy Keane
1 week ago
Roy Keane makes Jamie Carragher remark as fans break into Old Trafford
Next Page