Ole Gunnar Solskjaer has denied that he is getting regular pointers on managing Manchester United from his former boss, Sir Alex Ferguson.

After a club record seven wins from his first seven games in charge, the former striker has earned plaudits from all over, leading to claims that he is in "daily contact" with the Scotsman. However, the current Manchester boss rebuked these reports on Monday.

“We don’t speak weekly,” said Solskjaer. “I haven’t spoken to him many times."

Instead, Ferguson has been making more casual visits to the club he said, including to check in on his former striker Giuseppe Rossi, who is training in Manchester as part of his latest bid to return to fitness.

"He has been in to visit us just once, he has been in to see Rossi once," added Solskjaer. "The influence is more my 15 years under him. He is 77, it is not fair to him either is it?”

Much has been made of the similarities between the Scot and Norwegian, with the pair said to be in regular communication following Ferguson's return to his club consultancy role in late December after having time off due to brain surgery. 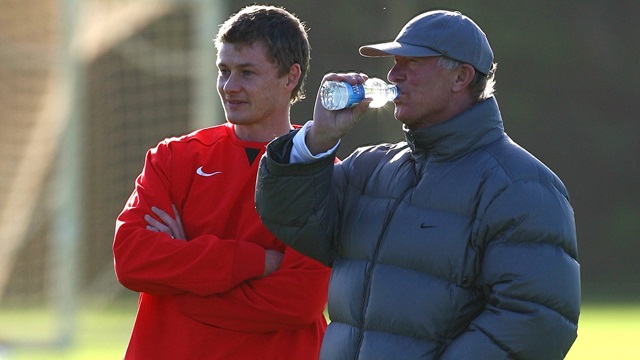 Solskjaer pictured with Ferguson in 2006.

END_OF_DOCUMENT_TOKEN_TO_BE_REPLACED

In 11 years at United as a player, Solskjaer only ever worked under Ferguson and lifted six Premier League titles alongside two FA Cups and a Champions League.

And the 77-year-old's influence on the current boss hasn't been lost on the players who have worked under both men, Paul Pogba noting ahead of the weekend win over Brighton that a familiar atmosphere has returned to the club.

"It’s like home for [Solskjaer]," Pogba told Football Focus. "He knows he didn’t really change, he came back to the time of Ferguson, I would say. The training, the way we use the box, it’s everything like before."

popular
Eric Dier calls Dele Alli on his tantrum in All Or Nothing changing room row
Sean Kelly sums up emotion of a nation as Sam Bennett all but sews up the green jersey
"I've always said I'll go back and play. I'll 100% play with Portlaoise again, and I really want to play for Laois"
The SportsJOE 12 o'clock quiz | Day 181
The Tipp minors who beat Dublin's golden generation: the ones that got away
SportsJOE 2000s Football Quiz | Round 16
The Alby Mathewson speech that lit a fire under Ulster
You may also like
3 days ago
Man United beaten to Sergio Reguilon
4 days ago
Sergio Reguilon edges closer to Man United move as talks intensify
1 week ago
'I only have myself to blame for this huge mistake' - Mason Greenwood
2 weeks ago
Sergio Reguilón would be a massive upgrade on Luke Shaw for Man United
2 weeks ago
How will Donny van de Beek fit into Manchester United's midfield?
2 weeks ago
Marcus Rashford puts UK government to shame with creation of poverty task force
Next Page