Sir Alex Ferguson has paid tribute to Liam Miller, who tragically passed away on Friday evening.

Miller was diagnosed with pancreatic cancer late last year, and sadly lost his battle with the disease after undergoing treatment in the United States and in his native Ireland. The former Celtic, Manchester United and Republic of Ireland midfielder was just 36, and had only retired in 2016 after a 16-year professional career.

Miller also had spells with Leeds United, Sunderland, Hibernian Perth Glory and Cork City, before ending his career with Wilmington Hammerheads in the US. He won 21 caps for Ireland. Following his passing, many throughout the world of football paid tribute to the former  midfielder.

Rio Ferdinand played alongside Miller at United, and paid his respects on Saturday afternoon.

As did several former United players.

Our thoughts are with Liam’s family .. Rest In Peace 🔴⚫️ @manchesterunited

Incredible sad news RIP Liam my heart goes out to all his family at this very difficult time.. pic.twitter.com/jgb4BhhXoj

Devastating news about Liam Miller. All my prayers goes to his family and friends. Rest In Peace. Liam always had a nice smile on his face. #heartbraking

Celtic, the club where Miller began his career, won a league title and played 44 times, held a minute's silence before their game with Patrick Thistle on Saturday.

Pat Bonner and Michael Stewart pay tribute to Liam Miller, who died aged 36 after suffering from cancer, followed by a poignant minute's silence at Celtic Park before the Scottish Cup tie against Partick Thistle. 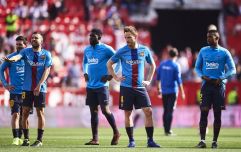 END_OF_DOCUMENT_TOKEN_TO_BE_REPLACED

And his former manager at Old Trafford has paid his respects. Ferguson signed Miller on a free-transfer from Celtic in 2004. The Irishman went on to play 22 times for the club, and Ferguson paid tribute to his professionalism and personality in a short statement, released on United's official website.

"I am very sad to hear that Liam has died. He was a good professional, who served our club in an excellent manner. He was a quiet, unassuming young man and was popular with everyone at Carrington. On behalf of all my staff who worked with Liam at the time, we send our deepest sympathy to his family."

Miller left the club for Roy Keane's Sunderland in 2006, and was part of the team which won the Championship in 2007. He may have not have played a lot of times for United, but he had no regrets.

He was kept out of the team by Keane and Paul Scholes, and only focused on the positives when asked about his time at Old Trafford during an interview with the Irish Examiner back in 2015.

"I genuinely look back and think, 'I played for Celtic', my boyhood club. I dreamed of playing for Man United and I got that opportunity as well. I don't know how many other people can say they played for their two childhood clubs, or even one childhood club. Of course, I would have loved to play more games, don't get me wrong, but I got to learn from some of the best players ever. Looking back, it was wonderful."

Miller is survived by his wife and three young children.


popular
Jacob Stockdale and Johnny Sexton not spared by English press
'Were they up for it more than us? That's my responsibility' - Andy Farrell
ROG hits the nail on the head assessing Ireland's performance
Baz & Andrew's House Of Rugby - Twickenham carnage
QUIZ: How well can you remember this season's Premier League results so far?
Triple Crown wrenched away as England scrape Ireland off their boots
Tyson Fury reveals what happened when he sparred Anthony Joshua
You may also like
4 months ago
Here's how every Irish rugby fan can get a free Guinness this weekend
4 months ago
Take on Baz & Andrew in World Cup predictions to win a signed Brian O'Driscoll jersey
6 months ago
Three ways Kerry can try to overcome the Dublin kickout press
9 months ago
Ireland underage international suffers serious injury after attack with a chemical
9 months ago
Czech international striker Josef Sural dies in team bus crash aged 28
10 months ago
Lodune Sincaid, The Ultimate Fighter 1 cast member, found dead at 45
Next Page