Dejan Lovren doesn't like Sergio Ramos. Or at least that's what we're assuming, given the last couple of days.

The Spain defender, who - wrongly or rightly - has earned himself a reputation for being a bit of a bastard down the years, upset Liverpool players and fans alike for the role he played in prematurely ending Mohamad Salah's Champions League final last May.

Lovren came up against him again on Thursday night as his Croatia side earned a last-gasp victory over Spain in the Uefa Nations League. 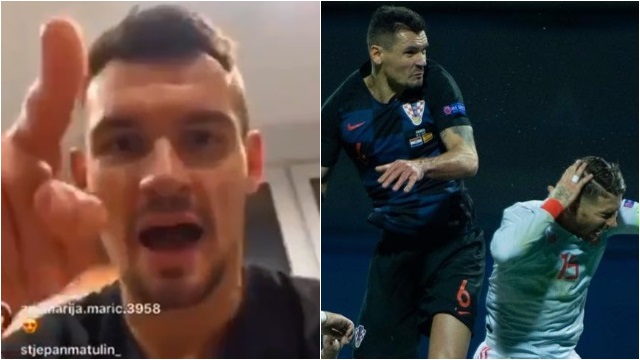 They don't get along

After the game, the Liverpool defender appeared to aim a post-match Instagram Live rant at Ramos, also appearing to take great delight at an image he shared on the platform which showed the immediate aftermath of him elbowing the Real Madrid skipper in the head. Accidentally, probably.

Some, including those who have to spend time writing about it, might have hoped this was the end of the matter, once and for all. It was not.

END_OF_DOCUMENT_TOKEN_TO_BE_REPLACED

A split image shows Lovren and Ramos shortly after full-time in last May's Champions League final in Kiev. A grinning Ramos cradles the European Cup in his arms while, in contrast, Lovren can be seen sobbing at the defeat.

Please, as gloriously petty as this is, let this be the last of it.

popular
You'll have to be a diehard fan to get 20/20 in this Liverpool players of the 90s quiz
QUIZ: You have 30 seconds to answer this one tricky football question
The SportsJOE 12 o'clock quiz | Day 286
SportsJOE 2000s Football Quiz | Round 11
Here's a list of 23 people who own a greater share of the UFC than Conor McGregor
Wayne Rooney story about Memphis Depay shows why he failed at Manchester United
If Twitter was around for 1994 Hurler of the Year farce, it would have been pure carnage
You may also like
13 hours ago
Redemption for Victor Lindelof gives United supporters another reason to believe
15 hours ago
Jurgen Klopp calls Man Utd style 'the worst thing you can face in the world' after draw
16 hours ago
Jordan Henderson says Liverpool were frustrated by "strange" half-time whistle call
1 day ago
Liverpool fans complain at timing of half-time whistle in Man Utd draw
2 days ago
Alex Ferguson's dismissive comments confirm truth about Jordan Henderson
5 days ago
Paul Pogba's reward for Burnley bullet by may be seat on Anfield bench
Next Page