Burnley manager Sean Dyche has criticised Arsenal midfielder Granit Xhaka for diving in the Clarets' 3-1 loss to the Gunners on Saturday.

A Pierre Emerick Aubameyang brace and a stoppage time strike from Alex Iwobi put Arsenal on level with Chelsea in fourth place while the loss for Burnley keeps Dyche's side in the relegation zone following Southampton's win over Huddersfield.

Burnley have now lost five of their last six games in the league and Dyche snapped at their lack of penalties this season as well as what he sees as diving from Granit Xhaka and Sokratis.

"Down here you do need decisions I thought there were so many that went against us today," Dyche told BBC Sport.

"I't was very difficult today and I'll reel them off. because I think they're important today. Ashley Barnes somehow comes out of a tangle when he gets elbowed in the face, I’ve seen it back by the way. Their players rolls around with an unnatural arm movement that goes before his body would naturally roll around and hits Barnsey and somehow Barnesy gets a booking.

"The biggest one of all for me because it is alarming in the stats is that is now 60 games without a penalty. Two-handed push on Kevin Long in the box and nothing is given because he goes down naturally.

"We saw last weekend at Tottenham that Harry Kane gets fouled and he goes down naturally and he doesn't get a penalty and we all know the players that are falling all over the place and do get penalties.

"Our player goes down after a clear two-handed push in the back and we don't get a penalty but apart from that I was quite happy with the referees performance." 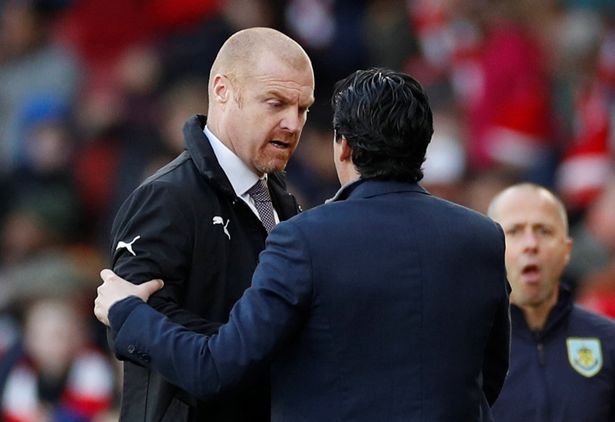 Meanwhile Dyche and Arsenal manager Unai Emery shared a tetchy post-match exchange on the sidelines with Dyche revealing that Emery questioned why he went after referee Kevin Friend.

Dyche said in response, "Yes I absolutely was. Have a merry Christmas."