Scapegoats stand up for United as Liverpool's profligacy continues

Liverpool are three games without a goal and United are still unsure of themselves. On the surface, a point at Anfield isn't a bad return for Olé Gunnar's men but cooling any Mancunian optimism is a makeshift Liverpool team, a Liverpool team playing the worst football they've played in three years. So, what have you? United are hanging in there and Liverpool are stuck on heavy ground. Pep Guardiola's ears are pricking.

Thiago began like a blue arse fly, tearing around Anfield like he'd never been there before. He hadn't, and on his home debut, the punchy little Spaniard was drawing cold sweats out of Manchester United markers. Scott McTominay wasn't even within a social distance.

Anthony Martial looked dangerous for a moment but normality was soon restored. United were a little desperate, Pogba, Fernandes and Rashford all resorting to ambitiously ambitious over-the-top balls. Liverpool's novel centre back pairing of Fabinho and Jordan Henderson could be forgiven for thinking this defending lark is a walk in the sun.

The best chances of that first half fell to Liverpool's Bobby Firmino, who looked he'd been given a pre-match team-talk by Wayne Gretzky. Living by the mantra that you miss 100% of the shots you don't take, Firmino went onto miss 100% of the shots he shouldn't have taken. The Brazilian could have played in Andy Robertson on more than one occasion.

This final third jumpiness was alien to Liverpool in the 2019/2020 season but it's not flowing for them anymore.

Bruno Fernandes' poor run of recent form continued, the Portuguese was shoved off the ball far too easily in that first half. His dipping free-kick the closest either team would come to breaking the deadlock in a drab opening period.

SO CLOSE FROM BRUNO 👀 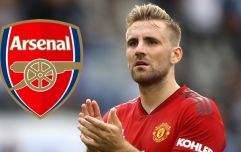 END_OF_DOCUMENT_TOKEN_TO_BE_REPLACED

In the second, it was more of the same. You have the ball there, we'll have the ball here. The teams teams became cagier as the clock ticked and the stakes rose. There were chances at both ends however - unfortunately for Liverpool, theirs' fell to an errant Firmino, while Fernandes and Pogba were denied by a sharp Alisson for United.

For this scarcity in goalmouth activity, both defences should be complimented. Liverpool's back four were their best line and United's back men were water tight. Best of the best were Andy Robertson - one of the few Liverpool players who hasn't stagnated in line with those around him - and the pair of Englishmen on the left side of Manchester United's defence. Harry Maguire snuffed out Mo Salah for fun as his recent progression continued. Luke Shaw - another eternal scapegoat - was foot perfect yet again in a display full of composure and tenacity.

In the end, it petered out like most of these heavily-billed games seem to. Bruno Fernandes broke the monotony of it all momentarily when he had his Johnny Sexton in Paris moment. He lost the cool after a near comedic exchange with Gini Wijnaldum, which ended with both men being substituted.

It would qualify for the highlights of a game that wouldn't have either manager losing the run of themselves.