After Roy Keane's attempt to sign him at Pizza Express, Mido knew it would never work

Even when he's trying to persuade a player to join his club, Roy Keane is a man of few words.

There are several stories about Keane's behaviour when it comes to transfers during his time as manager of Sunderland and Ipswich Town which sum up the Irishman's no-nonsense personality.

Keane famously changed his mind on bringing Robbie Savage to Sunderland because of his voicemail, which said: "Hi, it’s Robbie – whazzup!"

The former Manchester United captain also got into a shoving match with Jonathan Walters when Walters wouldn't believe that no bids had come in for him when he wanted to leave Ipswich.

Mido, formerly of Spurs and Middlesbrough, has now given some insight into what it's like to sit opposite Keane when he's trying to convince a player to come on board.

“Roy Keane wanted to bring me to #SAFC before I went to Boro...

...he picked me up and took me to lunch at Pizza Express!” 🍕

“Roy must have been paying!”@MidoAHM reveals how Roy Keane failed to wine and dine him 😂 pic.twitter.com/QqUHCbCg2A

"It was never going to work with me and Roy Keane," the former Egypt international said on Alan Brazil Sports Breakfast.

"He took me for lunch. He wanted to convince me to sign for Sunderland just before I joined Middlesbrough. I was at Tottenham. 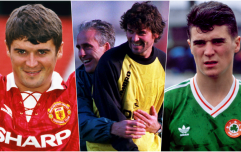 END_OF_DOCUMENT_TOKEN_TO_BE_REPLACED

"My agent Mino Raiola said, ‘Mido, Roy Keane wants to have lunch with you and show you the training ground’.

"So I went to Newcastle airport, he came to pick me up in his Range Rover, we went to Sunderland and he took me to lunch to Pizza Express.

"I was very surprised that he didn’t talk to me much.

"Normally you get a player for lunch, you try to talk to him and try to convince him to sign for your club, but he didn’t talk much, he was just very quiet.

"I knew straight away that me and him, we could not work together, we would end up fighting. He was talking to me and looking at the ceiling…

"I knew straight away that it would not work."