"He gets to the ball first!"

On August 16, 1992, Roy Keane played his first game in the newly revamped Premier League and was victim to a dreadful call from referee Mike Reed.

Keane lined out in the centre of midfield for Nottingham Forest, alongside Gary Crosby. It was the start of his third season in the top flight with Brian Clough's side and the first in the Premier League after it was rebranded from the Barclay's First Division.

END_OF_DOCUMENT_TOKEN_TO_BE_REPLACED

Forest had finished the previous season in 8th and had been runners-up to Manchester United in the League Cup. This clash at the City Ground was the first ever 'Super Sunday' clash on Sky Sports, and Forest took the lead against visitors Liverpool after a first-half strike from Teddy Sheringham.

Forest showed few signs of the troubles that would later plague them in the league, and pushed to double their lead, after the break. Crosby and Nigel Clough went close but Keane should have won his side a penalty, midway through the half. Instead, Reed waved away a stone-wall shout. 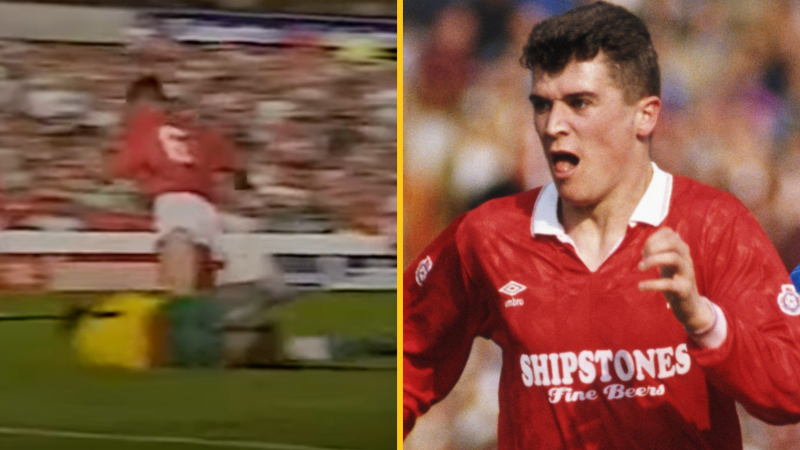 END_OF_DOCUMENT_TOKEN_TO_BE_REPLACED

With Nottingham Forest passing the ball confidently about, Nigel Clough's ball out to the left wing took a deflection of Liverpool's Mark Wright and fell o an on-coming Roy Keane.

The midfielder took the ball in his stride and got another touch before Liverpool goalkeeper David James, playing his first league game for the Reds after a summer switch from Watford, came rushing out to clatter into him. On commentary for Sky, Martin Tyler declared:

Keane was furious when referee Mike Reed waved play on, and there was a chorus of boos and jeers from the Forest fans, moments later, when there was a break in play.

Andy Gray, on co-commentary for Sky, was incredulous after watching the incident live, and then seeing the replay. He commented:

"I think that young goalkeeper is a pretty pleased man after the referee's decision. Here we see it again - Roy Keane gets to the ball first, the goalkeeper is committed and I can't see any dive there. I really can't."

Nottingham Forest would go on to win that Super Sunday game 1-0, but their season soon unravelled. They ended up losing seven of their next 10 league games and drawing the other three.

The phrase 'too good to go down' followed them all season, but Clough's side would end up with 40 points from 42 games and finish bottom. Teddy Sheringham would leave, for Spurs, midway through the season. Roy Keane moved to Manchester United the following summer.

Three years after being accused of diving by referee Mike Reed, Keane was sent off for United, against Blackburn Rovers, when he was adjudged to have dived and received his second booking of the game from ref David Elleray. Keane would proclaim:

"I am not a diver. I didn't agree with the referee's decision. There are so many different opinions, and I have mine - disagreeing with the interpretation that I dived."

As for Reed, the referee was placed on probation for his final four months in the Premier League. The decision came after he was seen to clench his fist in apparent celebration when Patrik Berger scored a goal for Liverpool. Reed had insisted he was congratulating himself for waving play on after Vladimir Smicer had been fouled in the build-up to the goal, but the league took a dim view of that excuse.

"I am glad this is my final season," he said. "I am disappointed by the reaction of the league. I felt I was right awarding the advantage rule but instead I have got a rollicking for it.

"I had already received a letter telling me to keep my emotions in check but then I was told the incident would be brought up at a meeting. The upshot of that meeting was that the chairman of the board wanted me to be suspended for three games."


popular
Peter O'Mahony riled by "petulant s**t" as Munster toasted by Dragons
Martin O'Neill doesn’t wait for a second invitation to settle an old score with Matt Doherty
Grim injury news for Seabelo Senatla after Bundee Aki's red card clear-out
GAA JOE Team of the weekend
55-year-old County Cork athlete beats Kaka in Berlin marathon to remember
James McClean's battle with John McGinn worth the attendance fee alone
Roy Keane wasn't having Ronny Johnsen's lovely gesture in Man United legends game at Anfield
You may also like
1 week ago
Why have some Premier League games been postponed this weekend?
1 week ago
Your guide to a great weekend of football and rugby and how to stream it all
2 weeks ago
English football could be postponed for a second weekend
2 weeks ago
Thomas Tuchel releases emotional statement after Chelsea sacking
2 weeks ago
Fears of fans disrespecting the Queen 'was a factor' in football postponement
2 weeks ago
Dublin could host Champions League games next week
Next Page