Too focused on issuing instructions or just some general shithousing?

Nottingham Forest lost vital ground in their quest to reach to playoff places when they lost to championship strugglers Rotherham.

Forest slipped to five points off the playoff spots after their 2-1 loss and may now have to aim for six wins in their closing run to have a hope of gaining a chance at promotion to the Premier League.

Daryl Murphy got the nod to start up front again but it was Lewis Grabban that got Forest's goal. His strike cancelled out Michael Smith's opener but Smith, midway through the second half, then teed up Michael Ihiekwe to get the winner.

Roy Keane was involved in an odd sideline encounter with Rotherham's Will Vaulks. This was the fourth time since Keane joined Martin O'Neill at the City Ground as assistant manager.

Keane has already in arguments, along the sideline, with Aston Villa assistant John Terry and Derby County boss Frank Lampard, in February. Having battled against both men during his playing career, none seemed capable of bottling that passion.

Lampard appeared to tell Keane, during Forest's 1-0 win over Derby, to "get some f***ing balls" when they had a difference of footballing opinions. Then, earlier this month, Keane was booked - 13 years after his retirement - during Forest's 1-0 loss to Stoke.

Roy Keane received a yellow card this afternoon at the bet365 Stadium... #nffc

This afternoon, during Forest's damaging loss, Roy Keane stuck to the Forest bench for most of the game. 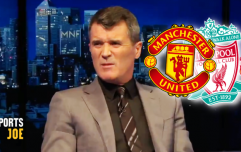 END_OF_DOCUMENT_TOKEN_TO_BE_REPLACED

However, he felt compelled to go and stand right in from for Rotherham's Will Vaulks as he prepared to launch a long throw into the Forest box.

Bravely enough, Vaulks was not standing on ceremony and he gave Keane a shove out of the way before letting rip with his throw.

Well an almost predictably disappointing afternoon for #nffc today, with the Reds losing at Rotherham. Amusing Roy Keane-based shenanigans though on the touchline, with Keano trying to block @WillVaulks from taking a long throw but the Rotherham man shoving him aside. Brave man! https://t.co/10ZCAPLD2k

Following the game, O'Neill told the BBC that he was disappointed that set-pieces were the downfall for his side.

"We have tried in recent weeks to be as strong as we possibly can defensively... This is not the early part of the season where we can look at it. We are in the real business end now and to lose games like this is obviously a set-back for us," he said.


popular
"Conor Murray was hung out to dry"
Kilkenny youngster pulls off the no-look hand-pass once more
Jarlath Burns: The club man going to the top so he can bring it all back
Guinness Pro14 preview: Leinster v Glasgow
"Ireland don't ever do anything different and that's the worry" - Mike Tindall
ROG hits the nail on the head assessing Ireland's performance
Superb TG4 documentary offers insight to lives of up-and-coming rugby players
You may also like
5 months ago
Roy Keane 'always had question marks' about David De Gea
5 months ago
'You're a bully... but I'm not scared of you. Let's have it, me and you' - Jon Walters
5 months ago
"What he went in to, I never expected that" - Jon Walters responds to Roy Keane
5 months ago
"Roy Keane is the most self-obsessed, narcissistic bore Ireland has produced in a long time"
5 months ago
Jon Walters v Roy Keane
6 months ago
Jon Walters recalls great transfer stand-off with Roy Keane
Next Page