Sometimes Ronnie, you say it best when you say nothing at all.

There was a powerful moment in Denmark and Belgium's Euro 2020 Group Stage class, when after ten minutes of play, Belgium kicked the ball out of play as a mark of respect to Christian Eriksen. The Danish playmaker, who wears the number 10 jersey for his country, suffered a cardiac arrest on Saturday during their match against Finland and while he recovers in hospital, both sets of players and supporters stopped to pay tribute.

The noise around the Parken stadium was hair-raising, as for a full minute claps were heard around the Copenhagen grounds. Meanwhile, RTÉ commentator Ronnie Whelan was well within his rights to make the point that, sitting in his hospital bed, Christian Eriksen wouldn't have wanted such a fuss made out of the whole thing. 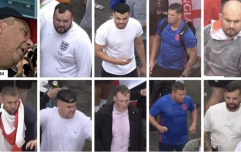 END_OF_DOCUMENT_TOKEN_TO_BE_REPLACED

The former Republic of Ireland international was probably spot on with that assertion but it was follow-up comment, when he stated that there's "no real need for it now, let's get on with the football again," that rubbed up some viewers the wrong way.

"I'm sure he'll be saying there's no real need for this, I'm sure he's that sort of a fella.

"I'm sure he's happy...but there's no real need for it now. Everything's alright, he's okay, let's get on with the football again."

Sometimes you say it best when you say nothing at all Ronniepic.twitter.com/GPLzn0Sivm

It's hard to know whether Whelan was speaking from Eriksen's perspective the whole way through but at the best commentators often say, sometimes you just let the moment speak for itself.

This appeared to be one of those moments.


popular
The JOE Friday Pub Quiz: Week 253
Ireland make respectful gesture during Parade of Nations at Olympic opening ceremony
“We find the remarks offensive" - Lions complain over Neil Francis' comment about Marcus Smith
After seven years in charge, Armagh have a big decision to make on Kieran McGeeney
Cormac Egan's interview after Offaly u20s beat Dublin is everything that is pure about the GAA
Marcus Rashford approves Man Utd bio change as Sancho arrives
Absolutely no doubt who was the top pundit of Euro 2020
You may also like
1 week ago
Footage surfaces of Southgate asking Rashford, Saka and Sancho to take their penalties
1 week ago
Absolutely no doubt who was the top pundit of Euro 2020
1 week ago
People take knee at vigil outside Manchester mural as kid thanks Rashford for dinner
1 week ago
What these people did to the vandalised Marcus Rashford mural was just beautiful
1 week ago
Giorgio Chiellini almost brought Rome to tears with the most beautiful homecoming speech
1 week ago
Tyrone Mings not buying Priti Patel's "disgust" over England players' racist abuse
Next Page