"Nothing is going to change unless we all band together."

In 2017, life was going as planned, and as dreamed, for Rose Lavelle. A talented footballer from an early age, the Ohio native was a collegiate star in Wisconsin and was selected first in the National Women's Soccer League draft by the Boston Breakers.

She scored twice in 10 outings and was called up for the USA women's team and was named Player of the Match in her country's 1-0 loss to England in the She Believes Cup. She picked up a hamstring injury on international duty and that curtailed her playing time with the Breakers.

Lavelle was eager to show her club what she could really do in 2018 but she never got a chance. The Breakers folded and life was back in the air for the young midfielder. Fortunately, her potential shone through and her talent backed up her next move.

The NWSL held a dispersal draft in 2018 and, as first pick again, Lavelle headed to Washington Spirit. She settled in quickly there and continued to impress for the USA. Last summer, Lavelle was one of the stars of the show as the Americans clinched the World Cup in France. Her goal against The Netherlands, in Lyon, sealed a 2-0 final win for the USA. 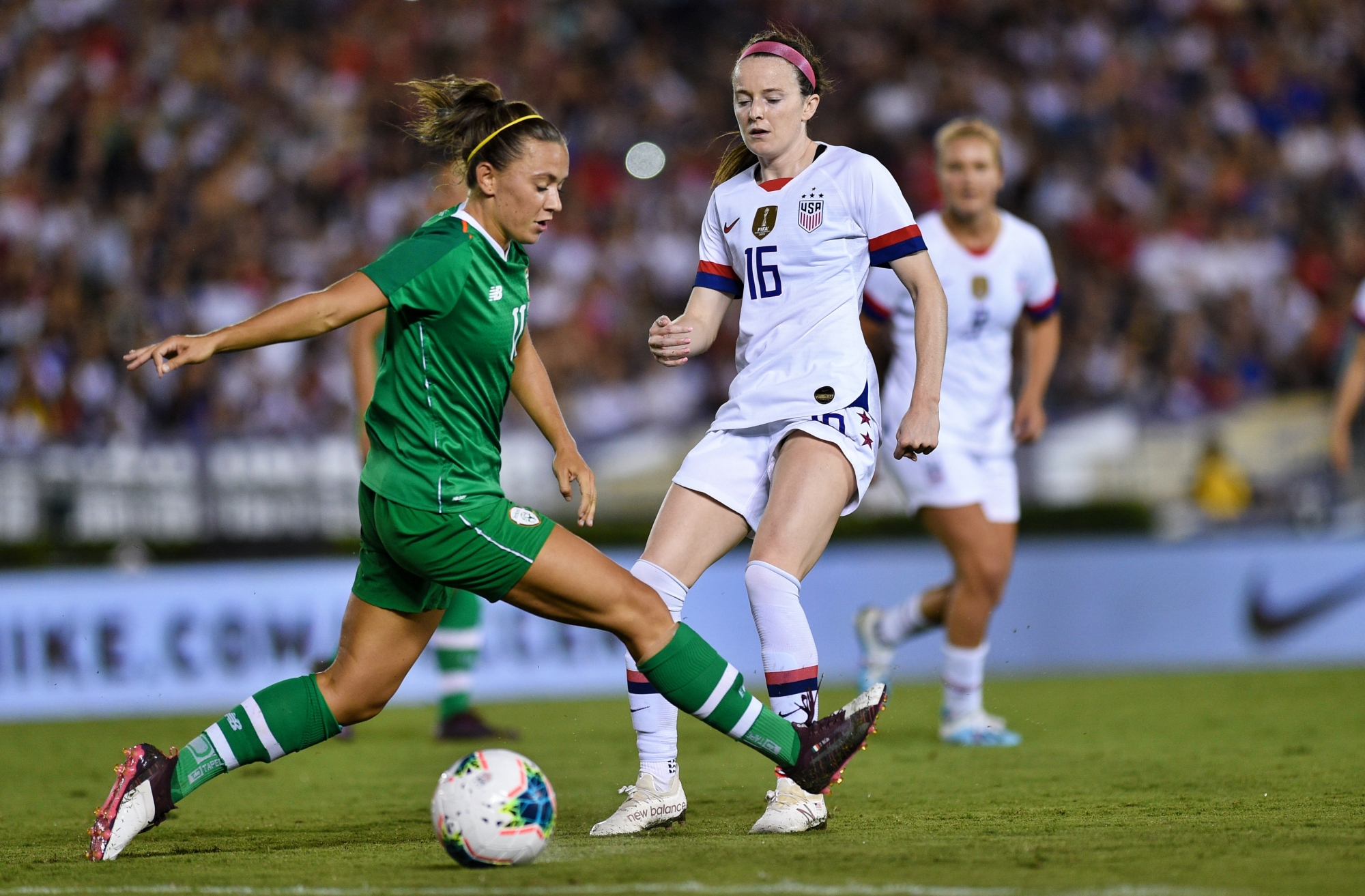 Rose Lavelle plays a ball through the legs of Ireland captain Katie McCabe during a friendly at the Rose Bowl in Pasadena, California. (Photo by Cody Glenn/Sportsfile)

The 25-year-old is back playing with Washington Spirit in the NWSL Challenge Cup and she has joined her teammates in getting behind the Black Lives Matter campaign.

In early June, days after George Floyd was killed whilst he was being taken into custody, Lavelle spoke out on her social media platforms against inequality and racism in America. 'We need everyone to do their part,' she wrote, 'speak up and demand better. I was not doing my part and I must do better'.

Lavelle tells us that a lot has changed in the weeks since that post, and much of it positive. "Obviously, social media wasn't as big when I was younger, and looking up to all these players loved watching," she says.

"Now it's like they can see themselves in me, not just through my play on the field but who I am as a person. And, hopefully, it makes their goals and aspirations seem more attainable too."

"I always used my social media as something that was light-hearted and fun," she adds, "and that in itself was a privilege - that I could just brush aside all these other social issues that were going on because it didn't affect me. That being said, obviously there are things that need to change in America." 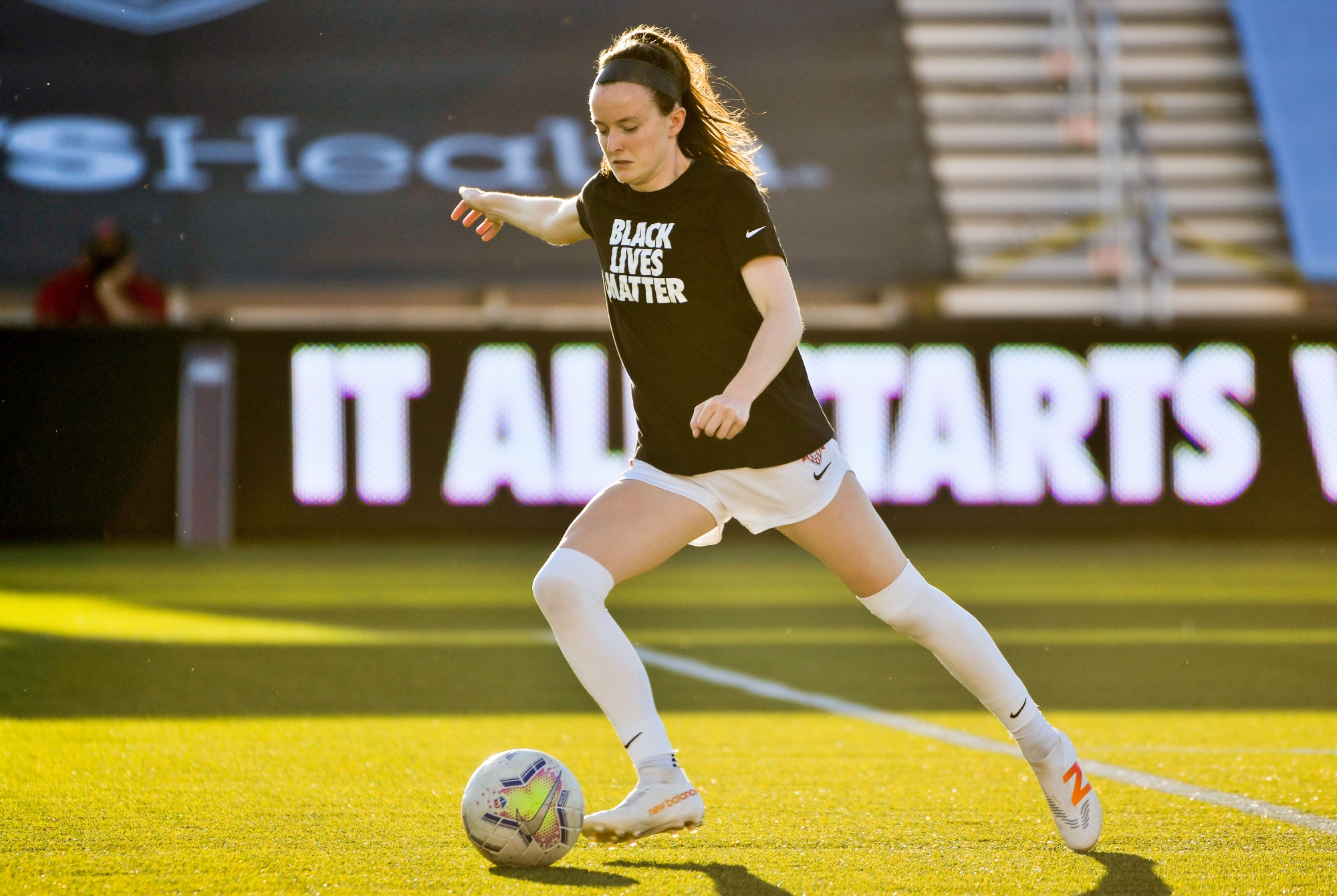 Lavelle says, "I'm still learning and educating myself, but nothing is going to change unless we all band together and are committed to helping things change. The first step is admitting your shortcomings and then committing to do better."

The 25-year-old looks to US teammate Megan Rapinoe as an athlete that has used their social media platform for good.

"We have a responsibility to use our platform and our voice and a great example of this is Megan. She's always been very vocal and has used her platform to help make things better for everybody, not just people who are like her."

Lavelle missed her team's weekend win over Houston Dash in the NWSL Challenge Cup but should be good to go for the knock-out stages. The games are being played behind closed doors but being broadcast on CBS. It is at those games, and on social media, that the high-profile USA stars can reach the most people with their message of solidarity and equality.

"There are things that need to change in America. The first step is admitting your shortcomings"


popular
Six minutes was all Alan Connolly needed to score two goals and set up another
Sensational scenes in Belfast as Antrim edge out Clare in a thriller
'Jesus Christ! How am I going to put up with this lad for nine weeks?!'
Gatland comments give insight as to why CJ Stander missed Lions call
Peter Queally vaults into Bellator title picture with stunning win over Pitbull
"Of the 37, Bundee Aki would be my 37th most expected selection and my worst rated"
The Garry Ringrose narrative around the Lions Tour is complete bull
You may also like
3 days ago
You'd swear the world was ending as Spanish tv host goes after Eden Hazard
4 days ago
Chelsea's 'supporter presence' move seems to be little more than a token gesture
1 week ago
The SportsJOE 12 o'clock quiz | Day 343
1 week ago
The SportsJOE 12 o'clock quiz | Day 342
1 week ago
Marcelo to miss Chelsea second leg after being randomly selected to work in polling station
1 week ago
Andrea Pirlo's 17-year-old son receives death threats over Juventus' form
Next Page