Martin O'Neill says he almost had to stop John Delaney falling off his chair when he told him the news.

It's no secret that Delaney and Roy Keane had their differences down through the years so when O'Neill told the FAI CEO, in 2013, that the Cork man was going to be his right-hand-man in his role as ROI manager, it's hardly any surprise that Delaney bore a perplexed look.

"At this utterance I race over to stop him from falling off his chair," O'Neill recalls, in his new Book 'On Days Like These: My Life in Football'.

END_OF_DOCUMENT_TOKEN_TO_BE_REPLACED

Delaney and Keane never really saw eye-to-eye. It was in Saipan when their relationship first turned sour but, in the mean-time, there was never any evidence of a bridge being built.

Keane unloaded on Delaney in 2009 when, after Thierry Henry's controversial hand-ball, the FAI made an appeal to FIFA to become the competition's 33rd team.

"It is the usual FAI reaction -'we've been robbed,' 'the honesty of the game," Keane said at the time.

"They can complain all they want. That is not going to change anything. France are going to the World Cup–get over it . They want sympathy as usual. It is the usual carry on and it is boring.

Martin O'Neill picks up the story in 2013, when he first mentioned to Delaney that Keane was his man. 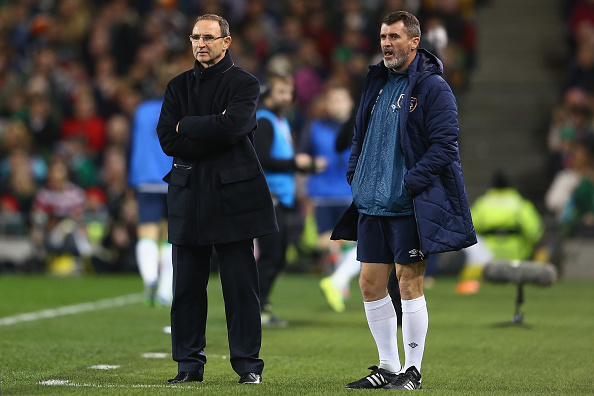 END_OF_DOCUMENT_TOKEN_TO_BE_REPLACED

"John and Roy have famously had a few differences and his immediate facial expression suggests he might fear a déjà vu situation.

"In fact, once he regains his composure he jests with a broad grin: 'We'd better batten down the hatches then.'"

END_OF_DOCUMENT_TOKEN_TO_BE_REPLACED

"Roy and I have recently worked together as pundits covering Champions League games," O'Neill continued.

"We once talked about international management and wondered — if the opportunity ever arose — whether working together would be appealing.

"Roy is a very intelligent man, erudite and easy company. His passion and commitment I take for granted. But in our conversations, he also spoke very thoughtfully about the game with an acute tactical insight that captured my attention."

O'Neill and Keane went onto manage Ireland for five years from 2013 to 2018, and led them to the last sixteen of the European championships in 2016, when they were beaten by France. They left their jobs in 2018 'by mutual agreement.'


popular
Roy Keane handled Gary Neville’s goal celebration as most Irish fans would
Roy Keane cracks up ITV pundits with description of Senegal supporters
World Cup 2022 Day 15: All the major action and talking points
From Ireland to Argentina: Alexis Mac Allister's Irish roots explained
Damien Duff makes 'brutally honest' England World Cup prediction after Wales win
Ronaldo finally reveals why he got that hideous haircut
Shay Given on how far Ireland could've gone at the 2002 World Cup with Roy Keane in the team
You may also like
3 weeks ago
"I was called ‘the Northerner'" - Martin O'Neill opens up on his time as Ireland manager
3 weeks ago
James McClean gets straight on to Graeme Souness after being told 'to get on with it'
1 month ago
Stephen Ireland explains why his Ireland career ended after only six caps
1 month ago
Stephen Kenny responds to Brian Kerr's criticism of his performance as Ireland manager
1 month ago
"Nobody could touch him that day" - When Roy Keane reigned in Spain
1 month ago
Man City and Juventus among major European clubs scouting young Ireland star, Rocco Vata
Next Page