Yes, you read that headline correctly

Petr Cech is hanging up his scrum cap when this season ends and in doing so will bring down the curtain on a long and storied career at the very top of professional football.

The Czech goalkeeper enjoyed tremendous success with Chelsea under a number of managers; establishing himself as the best goalkeeper in the Premier League for a number of years.

Unfortunately his last few years at Arsenal have been less impressive, and it was not surprising when he decided to call it a day.

What was surprising was what we learned today: that he would be releasing a charity single to mark his retirement, and it will be created in conjunction with the one and only Roger Taylor of Queen.

Now Cech is a keen drummer, as is Taylor, so he has always had a knack for music. 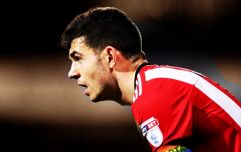 END_OF_DOCUMENT_TOKEN_TO_BE_REPLACED

One can safely assume that the single, which is wonderfully titled 'That's Football', will be some kind of stadium rock anthem, perhaps with a touch of Europop in there for good measure.

Alternatively it could be like 'Diamond Lights' by Glenn Hoddle and Chris Waddle, but either way we're excited.

It will hit shelves, well... digital shelves, next week. Make sure you download it.