"He has the United DNA running through him"

Peter Schmeichel has suggested that no one could do a better job as Manchester United manager than the one Ole Gunnar Solskjaer is currently doing, insisting that he is 'doing really well'.

United made a positive start to the campaign, beating Leeds 5-1 on the opening day of the season, quickly following that up with a draw against Southampton and a gutsy 1-0 win away at Wolves.

END_OF_DOCUMENT_TOKEN_TO_BE_REPLACED

Despite having only lost once so far in the Premier League, Solskjaer's men did suffer a shock defeat to Young Boys in the Champions League before exiting the Carabao Cup at the hands of West Ham.

Prior to grabbing their first Champions League points after Cristiano Ronaldo scored late to secure victory against Villarreal, the Red Devils lost at home against Aston Villa in the Premier League - conceding in the 88th minute and then missing a penalty in added time.

Following the loss against Villa, some United fans called for the Norwegian - who signed a new three-year deal at Old Trafford in the summer - to be axed immediately.

However, Schmeichel believes that there is nobody else who could 'change the fortune of Manchester United in a split second' and that his former treble-winning team-mate Solskjaer is the right man for the job.

Speaking to TalkSPORT after United's dramatic late win against Villarreal on Wednesday (29 September), the former goalkeeper said: "It is working quite well and it's working out quite well for the club as well.

🤷‍♂️ “There’s all sorts of headlines like #OleOut but give me another name!”

🧬 “Ole has the Utd DNA in him, he understands the club.”

Peter Schmeichel is delighted with how Solskjaer’s doing at #MUFC. pic.twitter.com/pdhTZ7GMA1 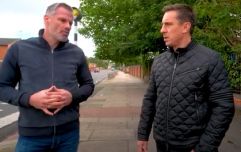 END_OF_DOCUMENT_TOKEN_TO_BE_REPLACED

"I don't think there was a question about how many changes needed to be done once he got the job.

"He didn't get the job full-time to begin with and the work he has to do is far from finished but I think he is doing really well.

"There's all sorts of headline likes #OleOut and fair enough if you think that but give me another name.

"Who can go in and who can change the fortunes of Manchester United in a split second. I don't see that person out there.

"I am very comfortable with Ole as the Manchester United manager. He has the United DNA running through him, he understands the club and what needs to be done today, next week and also in five years. 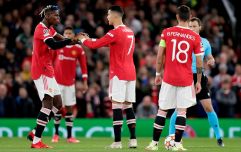 END_OF_DOCUMENT_TOKEN_TO_BE_REPLACED

"I think that's important. That continuity of how the club is. Every time we have hooked onto success we have managed to stay there for a long time. I am very happy with What Ole is doing and I see progression."

Man Utd host Everton on Saturday hoping to use the momentum from their comeback win on Wednesday night to get back to winning ways in the Premier League.