A lot has been made of the increased freedom at Manchester United nowadays.

Players like Paul Pogba, Marcus Rashford and Anthony Martial are flourishing now that they are no longer shackled or scared to attack.

The players are also apparently not afraid to let each other know in no uncertain terms when a mistake has been made, as evidenced by Pogba's behaviour towards Luke Shaw in Sunday's 1-0 victory Tottenham Hotspur at Wembley.

END_OF_DOCUMENT_TOKEN_TO_BE_REPLACED

Shortly before the hour-mark, Shaw sprinted forward in an attempt to challenge Kieran Trippier but the Spurs full-back saw the gap in behind his England teammate and flicked the ball over Shaw's head, into space.

Christian Eriksen was rushing into that space and was just about to latch on to the ball when Pogba caught up with the Danish playmaker and covered for Shaw by conceding a corner.

Premier League rules dictate that we cannot show footage of the exchange but we can offer you crude screenshots and a reaction from those in the stadium, so enjoy that. 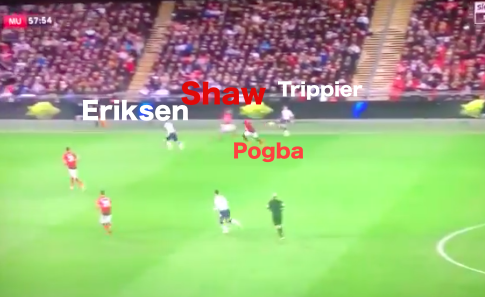 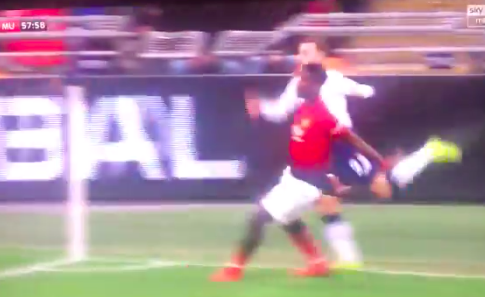 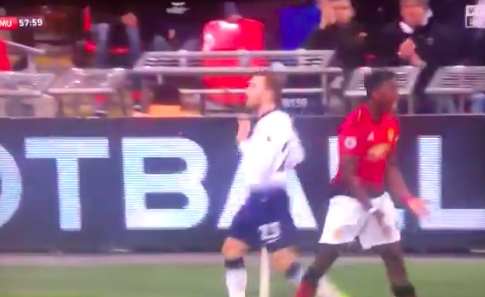 Viewers couldn't make out what exactly Pogba roared but his exasperation was clear as he took up his position for the corner that followed.

Pogba bellowing at Luke Shaw as the full-back left Eriksen and chased the man with the ball. Could hear Pogba 40 rows back! #MUFC

Luke Shaw came flying out to make a tackle and lost his man. Pogba cleans up and concedes a corner and goes absolutely crazy at him. #TOTMUN

Pogba rightly telling at Shaw cos I dont get what he was doing.

There was another exchange moments later when Pogba let fly with a wayward shot and was criticised by Shaw for doing so, to which the Frenchman replied clearly, "shut up!"

Pogba telling Shaw to shut up 🤐 who else saw that #TOTMNU


popular
Ireland make respectful gesture during Parade of Nations at Olympic opening ceremony
The JOE Friday Pub Quiz: Week 253
Cormac Egan's interview after Offaly u20s beat Dublin is everything that is pure about the GAA
Marcus Rashford approves Man Utd bio change as Sancho arrives
After seven years in charge, Armagh have a big decision to make on Kieran McGeeney
Absolutely no doubt who was the top pundit of Euro 2020
"Any team I've been involved in over the last five years, they've been way above their station" - GPS stats gone too far
You may also like
1 week ago
Man United given permission to make approach for Raphael Varane
2 weeks ago
Man United could land Eduardo Camavinga at bargain price
2 weeks ago
Raphael Varane reaches "pre-agreement" with Manchester United
2 weeks ago
Man Utd won't pay over the odds for Raphael Varane after Sancho deal
3 weeks ago
Luke Shaw hits back at "obsessed" Jose Mourinho after latest criticism
3 weeks ago
Eduardo Camavinga's representatives 'to meet Man United next week'
Next Page