Pogba could be on his way out of Old Trafford this summer.

Paul Pogba is reportedly so determined to leave Manchester United for Real Madrid this summer that he is willing to 'go on strike' to force a move.

Speculation that the World Cup-winning midfielder wants out of Old Trafford for a second time in his career has refused to die down since United's disappointing end to the season, with Real and former club Juventus both heavily linked.

Though United have indicated he is not for sale, Spanish outlet ABC report that Pogba is planning to submit a transfer request. Should that fail to secure a move, he will threaten to go on strike.

Though Ole Gunnar Solskjaer is said to want to build his new-look United side around Pogba, the midfielder is believed to have his heart set on a move to the Bernabeu where he will have the chance to play under his idol, Zinedine Zidane.

Despite Juve's interest - and willingness to send players in the opposite direction as part of any deal - Pogba reportedly prefers the idea of a move to Madrid over a return to Turin.

Pogba is over in Tokyo at present and he has told reporters there that he is ready for 'a new challenge'. He said:

"For me I have been for three years in Manchester and have been doing great; some good moments and some bad moments, like everybody. Like everywhere else. 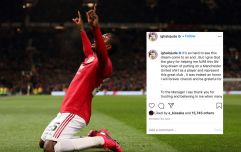 END_OF_DOCUMENT_TOKEN_TO_BE_REPLACED

United are said to want a fee of around £160m for Pogba, something which may prove problematic for Real, given their free-spending start to the summer.

Florentino Perez has already sanctioned high-profile, big money moves for Luka Jovic, Eden Hazard and Ferland Mendy for a combined total of close to £200m. This follows the £42.7m deal they agreed with Porto for Eder Militao earlier in the year while Rodrygo, the 18-year-old Brazilian they signed for £40m from Santos last year, will also arrive later in the summer.

Real, even with all their spending power, may be forced to sell some of their star players to facilitate a move for Pogba.


popular
Conor McGregor wants immediate Dustin Poirier rematch, for UFC title
QUIZ: Name every Chelsea manager hired by Roman Abramovich
The SportsJOE 12 o'clock quiz | Day 293
SportsJOE 2000s Football Quiz | Round 20
"If Munster hadn't given him a contract, I'd say Leinster would have gone after him"
The SportsJOE 12 o'clock quiz | Day 292
Every Premier League club crest, ranked from worst to best
You may also like
3 days ago
Bruno Fernandes training ground story proves he was perfect man for free-kick
1 week ago
Paul Pogba corrects Liverpool dressing room story after latest match-winning turn
1 week ago
Redemption for Victor Lindelof gives United supporters another reason to believe
1 week ago
Jurgen Klopp calls Man Utd style 'the worst thing you can face in the world' after draw
1 week ago
Jordan Henderson says Liverpool were frustrated by "strange" half-time whistle call
1 week ago
Liverpool fans complain at timing of half-time whistle in Man Utd draw
Next Page