"This is where it has taken Simeone now."

Paul Merson has been speaking the news that Everton have identified Diego Simeone as their "top target" to fill the vacant manager's position, and it's possible only Merse could have come to this conclusion.

On Tuesday, reports emerged that Everton owner Farhad Moshiri wants the Atletico Madrid manager to replace Ronald Koeman, who was sacked last month, and the idea was soon dismissed by football fans. Everton might be a club with a great history and ambitious plans for the future, and their owner seems willing to invest money into the club, but there's no way Simeone will leave Atletico to become their new manager. 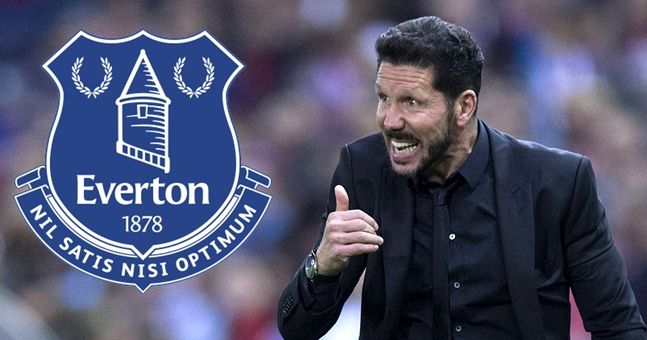 In the last six years, Simeone has helped Atletico to the La Liga title, the Copa del Rey, the Europa League and two Champions League finals.

They look unlikely to get out of their Champions League group this season, they're currently serving a transfer ban and are fourth in La Liga, eight points behind Barcelona and level on points with Real Madrid. But there's no doubt Simeone has done tremendous work with Atletico, even if, by the standards of recent campaigns, the season hasn't gone to plan so far.

The former Argentina midfielder's contract expires in 2020, and if he was to leave Atletico he would have the pick of jobs throughout Europe. As such, most football fans just couldn't understand why one of the best managers in the world would want to leave Atletico half-way through the season to take charge of a Premier League team in a relegation battle.

Yet, Paul Merson doesn't see it this way.

"This is where it has taken Simeone now," Merson said on Sky Sports show The Debate, on Tuesday night.

"People are saying he might be a bit big for the club, but he's been around a long time. Atletico Madrid are not the team they were and they are falling behind a bit.

END_OF_DOCUMENT_TOKEN_TO_BE_REPLACED

As far as Merson is concerned, the Premier League is the best league in the bloody world, and them foreign types would bite your hand off to manage here, Jeff. The former Arsenal player is basing this on the fact that some Spanish games kick-off early, which means they're now copying the Premier League and trying to "get the market."

If Simeone does become Everton manager (he won't), expect a Merson rant about the club not giving the job to Tim Sherwood instead.

You can watch Merson here:

popular
Wayne Rooney story about Memphis Depay shows why he failed at Manchester United
You'll have to be a diehard fan to get 20/20 in this Liverpool players of the 90s quiz
SportsJOE 2000s Football Quiz | Round 11
The SportsJOE 12 o'clock quiz | Day 288
QUIZ: You have 30 seconds to answer this one tricky football question
"I did for one second think of flinging the boot at him" - Maher's journey an inspirational thing
In defeat, Jerry Kelly dies with his boots on in coming of age final display
You may also like
1 day ago
Redemption for Victor Lindelof gives United supporters another reason to believe
3 days ago
Mesut Özil all but confirms Arsenal exit with not so cryptic tweet
3 days ago
Alex Ferguson's dismissive comments confirm truth about Jordan Henderson
6 days ago
Paul Pogba's reward for Burnley bullet by may be seat on Anfield bench
6 days ago
QUIZ: Name the Man United XI from the last time they led after 17 games
1 week ago
Harry Maguire furious as Robbie Brady avoids punishment for Cavani challenge
Next Page