25 minutes into a chat with Paul McGrath and I fear time may be against us, and that he may be looking to get on with his day. I have just asked him if he ever got in to present caps or speak with Stephen Kenny's Ireland.

It is not the length of the interview that McGrath is referring to, though. It is how he never truly warmed to public speaking and appearances.

END_OF_DOCUMENT_TOKEN_TO_BE_REPLACED

"But I love getting along to these things," he says, "because these people want to try and help me out. I get all that. And they've been lovely about it as well."

The former Manchester United, Aston Villa and Ireland defender tells says Alex Ferguson reached out, not long after he retired, and got him in for corporate work on match days. He would usually be paired with a comedian or local celebrity that would act as MC and tee him up to tell some football stories. "I must have been the worst person to have ever done it, but everyone was very patient. Very nice."

After many of the events wrapped, Ferguson, his old boss, would stick his head in for a chat. "'How are you doing?' he asks. 'How are you getting on?'

"After all we went through, I'd never say love but I definitely grew to like him more!" 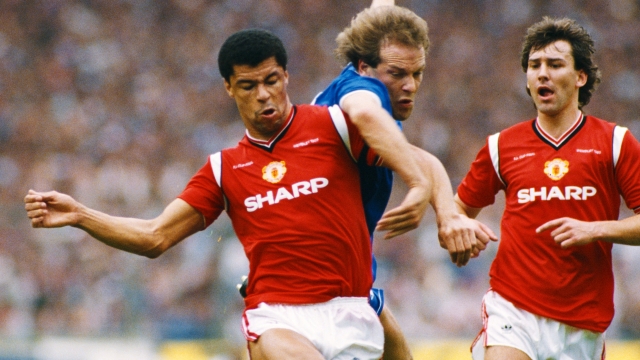 END_OF_DOCUMENT_TOKEN_TO_BE_REPLACED

Having looked close to ending what was then a 19-year league title wait, the wheels came off at the start of the next season. Atkinson lasted only three months into the next season and Ferguson replaced him.

McGrath and United went from a manager that was often in the same nightclubs as the players - "He'd come over to you and say, 'I hope you boys are leaving soon'." - to one that wanted to cut out the drinking culture at the club.

END_OF_DOCUMENT_TOKEN_TO_BE_REPLACED

Gordon Strachan was raving about Ferguson, who had managed him at Aberdeen, when he took over but getting hooked a few times at half-time fixed in McGrath's head that he wasn't long for Old Trafford. Knee injuries did not help, at all, and he joined Aston Villa in 1990.

Atkinson and McGrath secured a satisfying League Cup final win over United in 1994. McGrath felt Atkinson got what he was all about, but the manager he was closest to, during and after his career, was Jack Charlton. 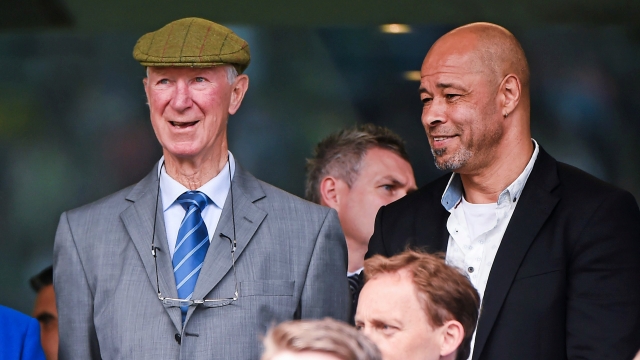 Jack Charlton and Paul McGrath pictured at the Aviva Stadium in 2015. (Photo by Paul Mohan/Sportfile)

'Jack Charlton was loved by every single one of us'

There is a truly poignant moment at the end of the 'Finding Jack Charlton' documentary that was released, and co-produced by former Ireland captain Andy Townsend, last year.

Charlton was suffering from dementia over the last few of his 85 years and is seen, in the documentary, not recalling famous footballing moments and faces from his past.

Not Paul McGrath, though. When Charlton was shown some clips of Paul McGrath on an iPad, his face lights up and he recognises him - "Paul McGrath!"

"It broke my heart, really, to be honest," says McGrath of that moment.

"Jack used to get names mixed up. He used to call me James, a lot of the time. He knew he had such a good connection with us, and we loved him for sometimes getting the wrong names.

"So to hear that, with him saying my name, it wasn't something where I was jumping about the place. I just felt really sad. Maybe because he hadn't called me James. If he had've said 'James', it probably would have made me feel better.

"I think, deep down, he did that [with the names] to keep us on our toes. But he was loved by every single one of us. We would have run through a brick wall for the man."

"The documentary was made in such a lovely way," says McGrath. "With Andy involved, it could only be that way, to be honest.

"I don't think Jack expected the Irish experience to be what it turned out to be. He thought he'd come over here and stamp his authority on everything, and it would all go swimmingly. But I don't think he reckoned on the crew he had taken on.

"The Irish lads were just as strong-headed. We loved mingling with supporters. If we won or lost a game, we'd have fiddlers and guitars out. It wasn't that we ever celebrated a defeat. Like the World Cups, it was just having these nights together where we recognised what an incredible journey it had been. We were amazed when Jack said, 'Oh, that's not a bad idea. That's pretty good'. And he rowed behind it. 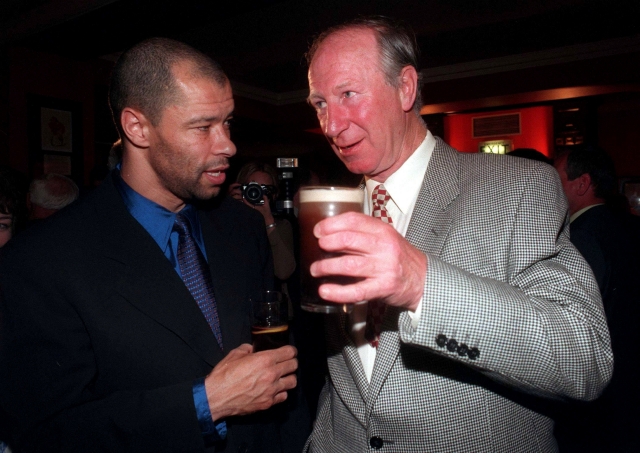 McGrath and Jack Charlton at the Paul McGrath Testimonial Dinner at the Burlington Hotel, in 1998. (Photo by Ray McManus/Sportsfile)

'Football gives everyone a chance to dream'

As a child of the 1980s, Paul McGrath and Packie Bonner were idols. I've been fortunate enough to interview both, now, and I start off our conversation by telling him what an honour it is. Typical of the McGrath I've heard so much about, he deflects the praise.

"I was going to say, I was hoping you were taking to Packie when you were saying that. He's a bit of a hero of mine as well."

Bonner was the reason, I tell McGrath, why I wanted to become a goalkeeper. "Did you make it? McGrath asks.

I tell him 'Yes', if you count Leinster Senior League Division 3 and an Astro Park runners-up medal as making it.

"To be fair, that's what it's all about. It's a great sport to be involved in. Even us running around on the Dun Laoghaire pitches, growing up, we thought we were the best players in the world. That's what football is. It gives everyone a chance to dream. I used to think I was Peter Osgood, back in the day." 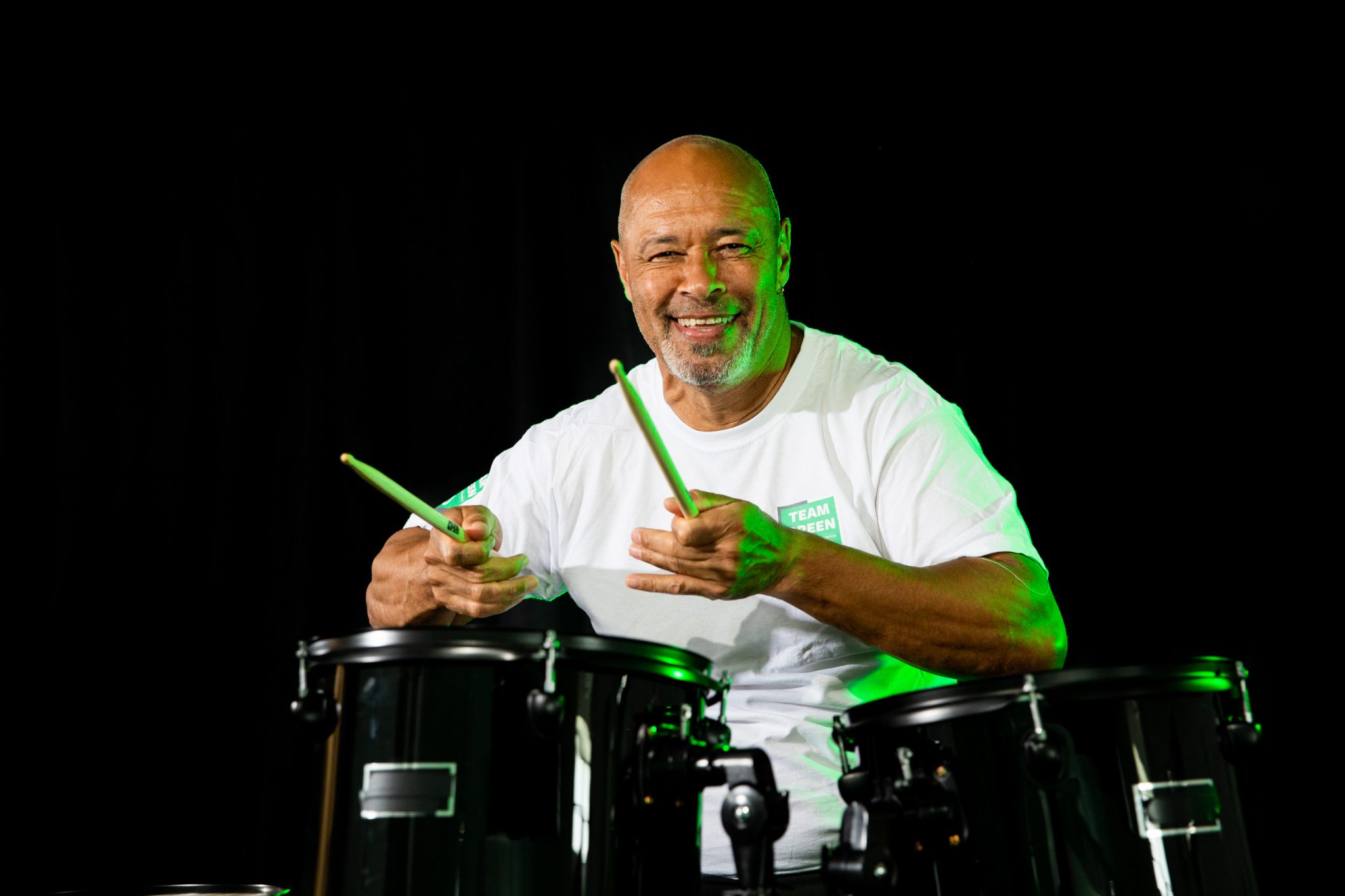 Now 62 and living down in Wexford, McGrath is well up to speed with the sporting goings on. He talks glowingly how the likes of Kellie Harrington and Paul O'Donovan fared at the Olympics, of Leona Maguire and Ireland's recent win over the All Blacks.

He gets to meet some of the next generation of Ireland's sports stars at awards ceremonies and for the odd PR opportunities he does. He is a 'Team Green' ambassador with Repak and talks of how it is young people that have ended up teaching his generation about recycling and caring for the environment.

He talks of the first Ireland games he got to witness in person, at the old Lansdowne Road, being rugby matches against the flying Welsh sides of the 1970s.

"We used to get free tickets for some games, at the orphanage I lived at in Dun Laoghaire," he recalls. "That was my first introduction to big sporting events, and I've always kept up that love and interest in rugby."

McGrath says that and you remember that he spent much of his youth in an orphanage after his mum, Betty, returned home from England and gave him up for fostering.

The man has an incredible story and is happy to give up an hour of his Thursday to talk about it. Just don't praise him too much, while you're at it.