Vieira appeared to kick out at the fan.

Crystal Palace boss Patrick Vieira was involved in an altercation with a fan on the pitch at Goodison Park following his side's defeat to Everton on Thursday night.

The Eagles had been 2-0 up in the first half after goals from Jean-Philippe Mateta and Jordan Ayew gave Palace a comfortable lead and put Everton in real danger of taking their Premier League fate to the final day of the season.

Frank Lampard's side came out fighting in the second half though and almost immediately got themselves back into the game through Michael Keane, before Richarlison equalised 15 minutes from time. 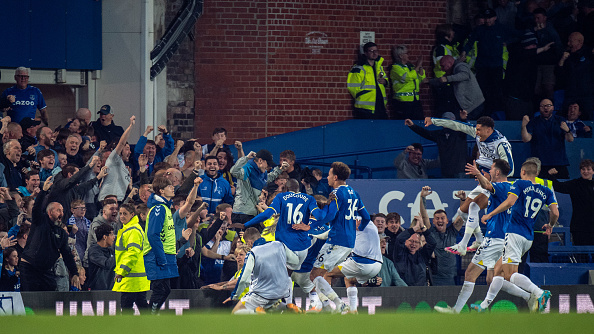 Everton came from two goals behind to secure survival

The Toffees were able to hold onto the win and with that secured their place in the top-flight for next season. As a result, Everton fans ran onto the pitch at Goodison Park to celebrate the relief of avoiding relegation.

Fans invaded the pitch at Goodison Park as Everton secured their Premier League survival with a 3-2 win against Crystal Palace. pic.twitter.com/9hEUIaFNG7

Vieira was confronted by a number of Everton fans

END_OF_DOCUMENT_TOKEN_TO_BE_REPLACED

But during the celebrations it appeared that Palace boss Vieira was confronted by an Everton supporter while walking back to the tunnel, leading to him reacting angrily.

Footage posted to Twitter appears to show the Frenchman grabbing the fan and pull him back before lashing out with his foot and attempting to kick the supporter.

Patrick Vieira kicking an Everton fan to the ground 🤣🤣🤣 pic.twitter.com/p6fVvYnzTd

Vieira was then pushed and surrounded by a number of fans before walking away. When asked about the incident by Sky Sports after the game, the Palace boss said: "I do not have anything to say about that."

Palace face Manchester United in their final game of the season at Selhurst Park whereas Everton travel to the capital to face Arsenal at the Emirates Stadium.